Halong Bay – the previous highlight of our trip through Vietnam 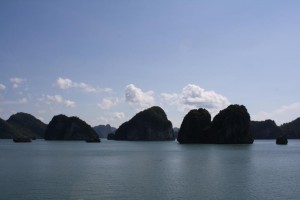 Halong Bay By night train from Sa Pa we drove to Ha Noi and arrived at the railway station at 4 o’clock in the morning. A taxi took us in total darkness to our Travel Agency. From there we started our trip to Halong Bay around 8 a.m. We decided once again to book the longer trip: one night on the boat and another on Monkey Island, a small island near Cat Ba Island. In this way, we saw Ha Noi awakening, but we were still glad that a completely overpriced café opened at 5.30 a.m. and we could have a small breakfast. A large coach took us to Halong Bay in about 3 hours. Already on the way our guide “Hi” introduced himself- a Vietnamese student with a passion for bad jokes and singing karaoke. ; ) Port of Halong Bay Right at the harbor there was some chaos at first, as our group should be distributed on 2 vessels. We ended up with about a dozen other people on the quieter, but very nice “Asia Cruise”. Due to the stressful days before, we were all right with it. After visiting our spacious rooms a delicious Vietnamese food was offered to us, as the boat began to move. During the meal we saw the first beautiful limestone islands that rise from the water. Hang Dau Go - Cave Immediately after the meal the next event followed: a visit to the “Hang Dau Go”- Cave, a huge limestone cave with rock formations which have, according to our guide, often the shape of animals such as turtles or monkeys. But in most cases they are hard to identify without overactive imaginations. Even if we were really looking forward to go swimming due to the heat, the cave was still impressive. After that we were brought to a floating village, where we started a kayak tour. We had about 30 minutes to paddle independently and explore the bay which was a great fun. Back on the boat bikinis and swimwear were unpacked! The top deck of the ship served as springboard and everyone could take a dip. Bathing was an appropriate reward for sweating all day. Halong Bay at night After swimming we continued our cruise through the bay. While we enjoyed the wonderful view there was finally some time for sunbathing, reading and doing nothing. Since we once again got to know very nice people the evening aboard was very funny. For dinner, the cooks came up with something special: we should roll our own spring rolls, which was fun, even if it did not work out for all people immediately.;-) The food was again very tasty! Then we went on deck to drink beer and watch the stars. Hiking tour on Cat Ba Island The next day a boat tour was scheduled to go to Cat Ba Iceland. After an early breakfast and a bit of stress we finally arrived at Beo Harbour where our new guide “Ti” (“like Green Tea”) greeted us. He told us that we would pass through a National Park on the way to our holiday resort where we would have the choice to go hiking or biking. Since one part of our relationship has to struggle with a bike-phobia over years we decided to go hiking again. It was described a little less strenuous than it really was. But the view over the park compensated for the sometimes difficult and slippery way to the top of the mountain. You should wear sturdy shoes, however. As we heard the cycling was also fun. After the sports activities followed another trip by bus and then by boat. Here, too, must be mentioned that one must be work with a lot of patience and sweat for such beautiful places as our “Monkey Island Resort”. Monkey Island But both our beach bungalow and the food and the beach were worth the hardships and we would have loved to stay a few more nights. Even our guide was heart and soul into it. First, he offered us a little walk to see some of the island’s monkeys. With some mixed feelings we set out – this time with a significantly depleted group due to the beautiful beach. We were told before not to laugh in any case. Showing the teeth could be perceived as a threatening gesture by the monkeys. After a few steps we saw the first monkey which has apparently been waiting for us. Despite we had strange feelings while climbing a few inches past the monkey he didn’t feel disturbed in eating his banana. A little later we saw more monkeys which came very close to us. To our delight a small snake joined at the end of our trip, but surprisingly we remained quite cool. Monkey Island Resort Back at the beach we hopped into the water first. But after a quarter of an hour our guide called out to the next event: a “floating bar” with small cocktails for free, which he distributed from a kayak, while we were drifting in floating tires. In the evening they offered a rich buffet of meats, seafood, french fries, rice, etc. In addition to dart and karaoke we could play pool or just enjoy the view of the sea after dinner. Monkey ladder for tourists Unfortunately, our trip went on the next day very early. If you have enough time in Vietnam we would advise to spend two days on Cat Ba Island or Monkey Island, as you are particularly busy only with the return journey on the third day. Our day was arranged from travel by boat, bus, boat, bus. Even if they allowed us a short lunch break with tasty food we were very tired in the evening. But right after our arrival another bus trip was already planned: the sleeping bus to Hue… Translated by Caterina 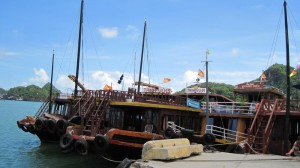 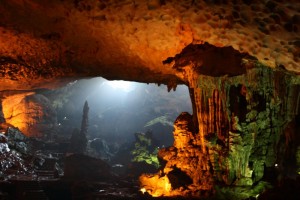 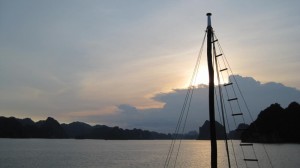 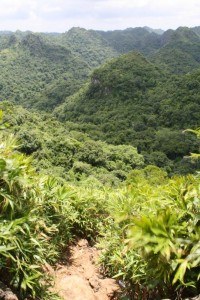 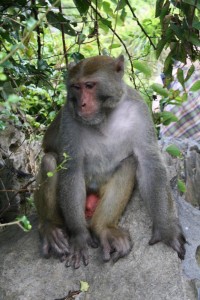 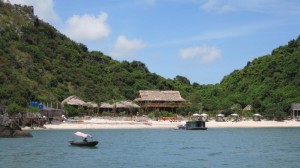 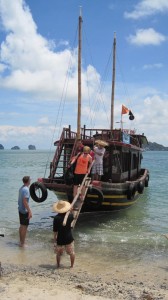