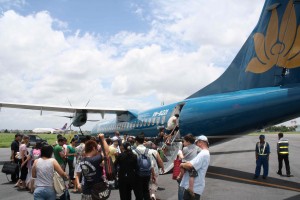 Plane to Phu Quoc At the end of our trip we visited for five days Phu Quoc Island. Besides the possibility to reach the island with charter boats , you have a good chance to get cheap flights from Sài Gòn when you plan early enough. As you can see on the photo, you will be transported together with many other Vietnamese tourists in a mini-plane. Our Swimming Pool At the airport we were picked up by the staff of our hotel “Eden Resort”. This usually overpriced hotel offered special prices due to the current low season and thus we decided to enjoy the last days in a really nice hotel. The hotel just opened this year and does not yet provide in all areas a reasonable service appropriate for the normal price. The beautiful pool with its restaurant directly on the beach compensate for many things… On the road by motorbike In addition to relaxing and sunbathing you can do many things on the island when the weather is fine. The best way to explore the island is by motorbike, which you can borrow cheaply anywhere. The only problem is that the roads offside the island’s center are often muddy “Dirt Roads” and difficult to drive on. The first day we explored the south of the island. On the so-called Long Beach, which goes down the entire southern west coast there are some pearl farms where you can buy beautiful jewelry made of pearls (partly very high prices!). Before entering the salesrooms, you’ll be informed in good English about how pearls are cultured. Even if you do not intend to buy something, it’s worth a short visit. Beach restaurant in Bai Sao Further down there is a small connecting road to the east side of the island, where in our opinion the island’s most beautiful beach is located: The Bai Sao Beach, a white sandy beach with crystal clear water. Here you can find a few beach restaurants that deliver all kinds of seafood, but also all sorts of other food right to the beach. A nice place to stop for a rest, to eat something and to cool down in the water. Dinner on the Night Market After the strenuous motorbike tours we usually went to the Night Market in the evening. This consists of a few street stalls selling mostly pearls and some small items produced on the island. However, one should better go to one of the farms to buy pearls, which we had to learn when purchasing pearl earrings. The seller wanted to convince us of the authenticity of the pearls by rubbing them on her stall. After this attempt, however, one of the pearls had a huge scratch… In addition, there are also some especially for the locals very popular restaurants, which serve very tasty Vietnamese food. Then you can have a smoothie on one of the many fruit stands and there’s even a stand with chocolate brownies! Suoi Tranh Waterfalls Another highlight was the visit of the Suoi Tranh Waterfalls in the center of the island. For a small admission fee you can walk through the jungle past a series of small natural swimming pools that are connected by small waterfalls. At the end there is a readily accessible waterfall , where you can take a water massage. A nice refreshment from the usually very humid and warm climate of the island. Cua Can Beach in the northwest of the island On the last day we were on our way to the “Wild West” of the island. Tourism is still a foreign term in the northwestern part of the island and children look at you with wide eyes full of amazement. Along the coast, the road is initially very well developed, but the further you get to the north the worse the roads get and you should be careful that you have enough petrol in the tank and do not underestimate the length of the route. On our tour we just arrived at the hotel on reserve. As the road from the north back to the center of the island is very adventurous and one person had to dismount from the motorbike to get up muddy hills, we reached our hotel just shortly after dark! Efforts are rewarded with beautiful deserted beaches and an “original” Vietnam, which has only little in common with the large cities today. Translated by Caterina 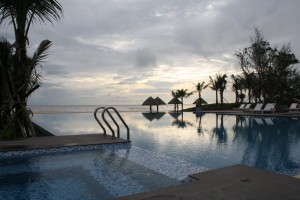 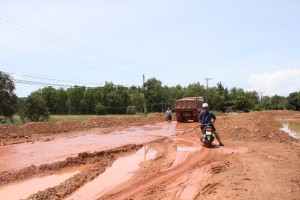 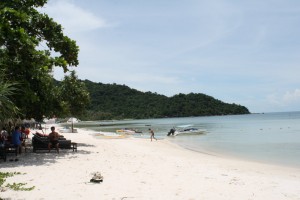 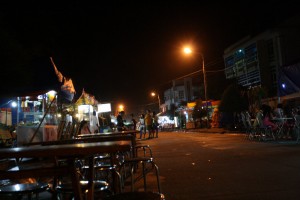 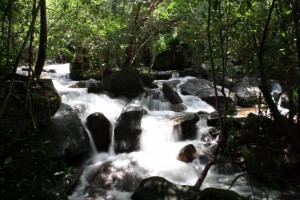 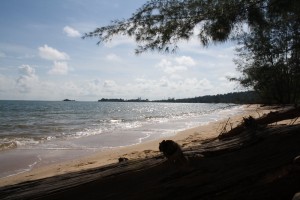