Sa Pa – a must for all travelers to Vietnam 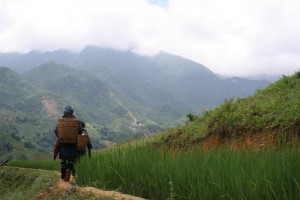 Tour to Sa Pa After three days in Ha Noi, we decided to make a trip to Sa Pa. Unfortunately it was not as easy as we had imagined. It is apparently not possible to travel there independently, because train tickets for sleeping compartments are fully booked a few days before the scheduled departure (since there are not many tracks, all public tickets are purchased from local travel agents and then sold more expensive to tourists). So we had no option than booking a complete tour. We chose the “Hard Trekking Tour” which includes one night at a hotel and two so-called “Homestays” (accommodation & meals with local families). Flyer for the arrival in Lao Cai We were picked up on time at 8 p.m. from our hotel and were driven to the station. There, the train ticket vouchers given to us before were replaced with real tickets. The process after arriving in Lao Cai (a train station about an hour away from Sa Pa) was controlled by a foolproof flyer that we have already received at the station in Ha Noi. After that we were brought to the waiting hall of the station and from then on we were on our own. There was a bit of chaos until we finally sat in the train compartment. We shared with two girls from the USA, a so-called “soft sleeper” compartment – a sleeping compartment with 4 upholstered beds. From stories we learned later, however, that it may happen that one can be accommodated with 6 other Vietnamese in a 4-compartment (Vietnamese then sleep three to a bed). We drove about 8 hours to Lao Cai, where the first surprise awaited us: It was raining like cats and dogs! The local organization was (apart from a longer waiting time for the next train) very good and we were picked up by a small bus of the hotel. Two drowned rats in front of the waterfall After a very quick breakfast in our beautiful hotel we started our first hike in the rain to the very nearby Cat Cat Village – without an umbrella and with a cheap raincoat, which they sell at the hotel. But the goal, a beautiful waterfall, made up for the pouring rain and the completely wet clothes. As it often rains in Sa Pa it would be the best to provide appropriate equipment in advance. The many small shops sell everything you may need for a rainy hike: raincoats, umbrellas, rubber boots … Map of our route Rice terraces in Sa Pa Our Group with the H'Mong girls After a quiet first day in Sa Pa, we set out on the next sunny morning for our first homestay in Ta Van Village, where the Zay minority lives. We were a group of 8 persons and the walk led through Lao Chai, the home village of Em, our guide, a member of the local H’Mong minority. We also had, thanks to the nice group, a lot of fun, but it was often very demanding, since it had rained a lot the days before and the roads were totally eroded in many places. Good thing that we were accompanied by several H’Mong girls who hurried to steep or slippery places to help us. In return for their help each of our group tried to buy a little thing from them and as thanks we received a friendship ribbon for free. Along the way you walk through valleys and mountains with beautiful rice terraces on their slopes. Only this panorama is worth the exertions of the hike. The beds at the homestay The first homestay began with a swim in a river near Ta Van Villages. Overall it was very comfortable with the family: cold drinks, good food, clean beds with mosquito nets and, above all, European toilets. Local farmers with water buffalos On the second day we went through Giang Ta Chai Village of the Red Zao minority to Ban Ho. Despite some very difficult passages we also had a lot of fun on this hike. Many times we met very small boys, who carried several huge water buffalos through the fields. If you decide to make this tour, you have to have fun on hiking, as several kilometers must be covered. The second homestay was very pleasant as well, apart from the hundreds of mosquito bites in spite of the nets and sprays. Waterfall in Ban Ho Village The third hiking day turned out to be much shorter. Em took us to a beautiful waterfall about 20 minutes away, where we could rest for a while. After a quick lunch we took the bus back to Sa Pa. It was very nice that the hotel provided showers and towels also for former guests. In the evening we were brought back to Lao Cai and from there we set out for Ha Noi. Again we were lucky with our fellow travelers, a Dutch, very nice couple. The night train was pleasant, even if the arrival in Ha Noi at 4.15 a.m. was a bit early. Overall, it pays to book a tour to Sa Pa, although it does not sound very cheap at first sight. According to our experience, it is worth much if organizational things are removed and you can concentrate on your surroundings. Usually you can count on to be picked up on time. The only effort was that procedures and daily points usually follow each other very quickly – so you often find little time to rest or to do other things. Translated by Caterina 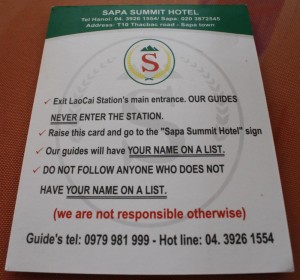 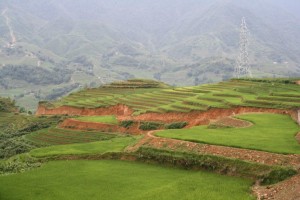 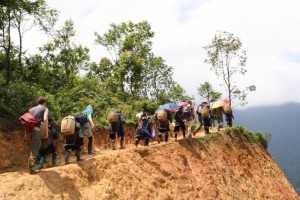 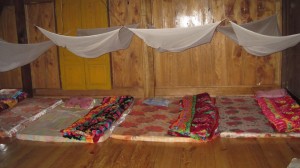 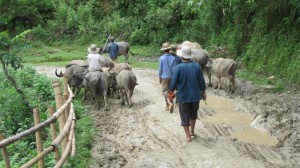 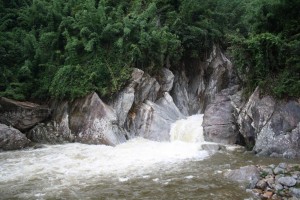