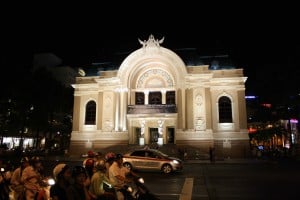 The old Opera House in Ho-Chi-Minh-City After our relaxing days in Mũi Né we set out to go to Sài Gòn by bus. The official name of Vietnam’s largest city, which was the capital of the Republic of Vietnam until 1975, is Ho-Chi-Minh-City (HCMC). Unfortunately, we could not stay more than two days in the city, which afterwards turned out to be too short. As the city differs strongly from other cities of Vietnam that we visited, we would have liked more time for sightseeing and shopping. Not only in culinary, but also in cultural regard Sài Gòn has to offer a lot. Very pleasant and cheap hotels with air conditioning and a good breakfast can also be found here spontaneously. War Museum in Ho-Chi-Minh-City Unfortunately, we had only little time for sightseeing, so we had to be content partly with impressions from the outside. Very impressive, for instance, is the old opera Sài Gòn`s at night. But also the Reunification Palace and the post office building are worth seeing. We also decided to visit the war museum in Sài Gòn. Although the documentation of the Vietnam War, as expected, was made very one-sided, in our opinion the museum is worth visiting. In addition to frightening images that show the war crimes of the United States, the weapons used at that time are issued. Especially reading about individual destinies was very depressing for us. Notre Dame Cathedral One should also take time to visit the Notre Dame Cathedral. Somewhat foreign this beautiful cathedral towers in the huge Vietnamese city. Unfortunately, we did not have the chance to examine it from the inside, because a wedding was officiated. Of course, you should also know and have seen the so-called Ben Thanh Market. Here you will find everything your heart desires. From glasses, T-shirts and sweets to medicines everything is offered. As we had to learn painfully, traders even get rough in their euphoria, so caution is required! If you do not want to pay four times the price as we did, you should compare prices in advance and show persistence in trading. ; -) Restaurant recommendation in Ho-Chi-Minh-City We would like to recommend a restaurant where you can eat very well. In the restaurant Quan An Ngon very tasty Vietnamese dishes are freshly prepared. It is particularly pleasant for tourists that all dishes are visible in small stalls, so you can also order simply by pointing at it. Unfortunately, we were put in the uncomfortable position needing medical attention in Sài Gòn (beware of any hot exhaust pipes!). As we now know how difficult it is to find an English speaking doctor you like to trust, we also want to give advice. We found good and competent assistance in the S.O.S International Clinic. Translated by Caterina 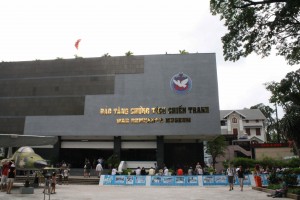 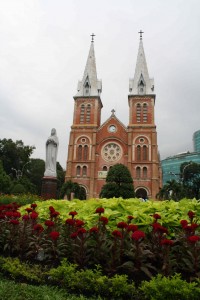 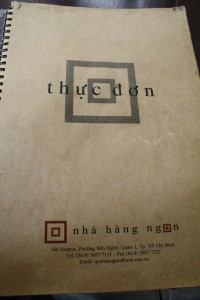