The imperial city of Huế 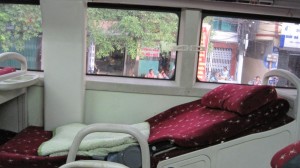 Couch on the soft sleeper bus After a 12-hour bus ride we arrived more or less rested in Huế. The “soft sleeper” bus from Hanoi to Huế (about 15 dollars) is, compared to the train (about 35 dollars), for smaller people in any case the much cheaper alternative. For tall Europeans the really very short and narrow beds that are available on the buses offer no real sleeping comfort. In addition to the chronically bad tempered bus drivers one must also withstand the constant honking that signals the passing maneuver to the motorbikes and other smaller vehicles. In Huế we first looked for a hotel to recover a bit from this long trip. We found a clean and reasonably priced hotel with Motorbike & Bicycle Rental, equipped even with a small swimming pool – in the heat of central Vietnam this is a clear advantage compared to all other hotels … By bike through Huế After our short lunch break we started to explore the city by bike. Since the traffic in Huế is significantly quieter and more relaxed than in the hectic and turbulent approaching Ha Noi, this city tours by bike are quite possible, even for the timid “Westerner”. Only the crossing of major intersections requires some courage and perseverance.;-) Imperial Palace in Huế Our first stop was the former Imperial Palace, an unfortunately during the Vietnam War severely damaged building, but now largely lovingly restored. We were mainly impressed by its vast area and rich decorations. Inside there is a faithful replica of the Forbidden City of Beijing. Even if you have to drag yourself through the heat and high humidity, it is a kind of must for any stay in Huế to visit the citadel. Đông Ba Market in Huế After this cultural activity, we decided – at least our female part – to go a little shopping. In the “Đồng Ba Market”, a large shopping market, you will find everything your heart desires: straw hats, shoes, clothing, jewelry, medicines, snake liquor, etc. Just as a tourist you should be prepared to be confronted with incredibly high prices first. But with some negotiating skills you can easily beat them down – usually at less than half of the original price. Our boat to visit the Imperial Tombs For the next day the visit of the “Imperial Tombs” was scheduled. Early on we started with a small brightly painted boat on the Perfume River. We were lucky that we were actually only four on a boat that was orientated for about 15 people. The ship’s crew consisted of a very nice Vietnamese couple who offered overpriced souvenirs made of silk while driving. If you have no food for the approximately 6-hour drive seafood is offered on the boat. We had banh mi – Vietnamese baguette sandwiches – with us that are offered on the streets and should be tried in any case. On the road with our motorbikes Tomb of Tu Duc Die The imperial tombs – before his death each emperor let built somewhere along the river a huge grave complex – are located more or less directly on the river, so that we shortly docked for the time of each visit. During the trip we saw interesting scenes of Vietnamese life on the river. First, we decided to visit three tombs: Tomb of Tu Duc, Tomb of Khai Dinh and Tomb of Minh Mang. It was very impressive to see how much wealth the former rulers possessed to live a comfortable life and to obtain a beautiful tomb later. However, one should know that some imperial tombs are not located directly on the river and it is better to drive. Motorbike drivers are waiting directly on the pier and if you are not careful they claim very high prices for the trip. Thien Mu Pagoda At the end of our trip we visited the Thien Mu Pagoda, which is definitely worth a visit. Monks are still living there, so you can watch them at work or while studying. The area offered a great way to relax in the shade of the trees after the quite arduous journey. However, most interesting is the small exhibition on Thích Quảng Đức, a monk of this order, who set himself on fire in front of a car in protest against religious repression of Buddhists in South Vietnam in 1963. At this place the car wreck can be visited. Overall, it is worth to book a boat tour of this kind. Since it cost us a lot of power carrying us through the midday heat, in the late afternoon we just enjoyed our hotel with its bathtub-warm pool. We were not incapable to do further trips… Translated by Caterina 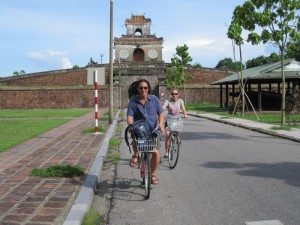 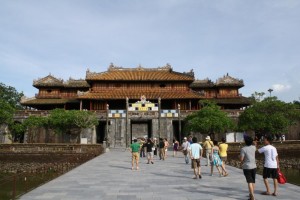 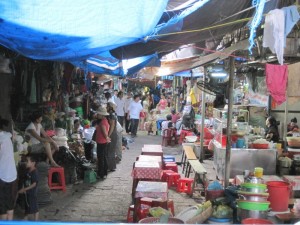 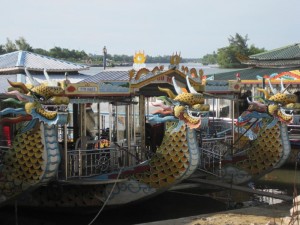 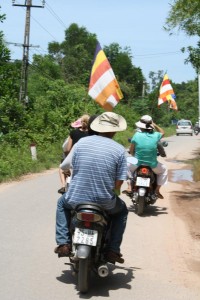 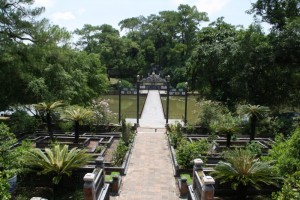 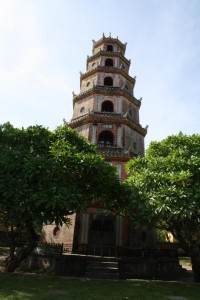