Hoi An: places of interest 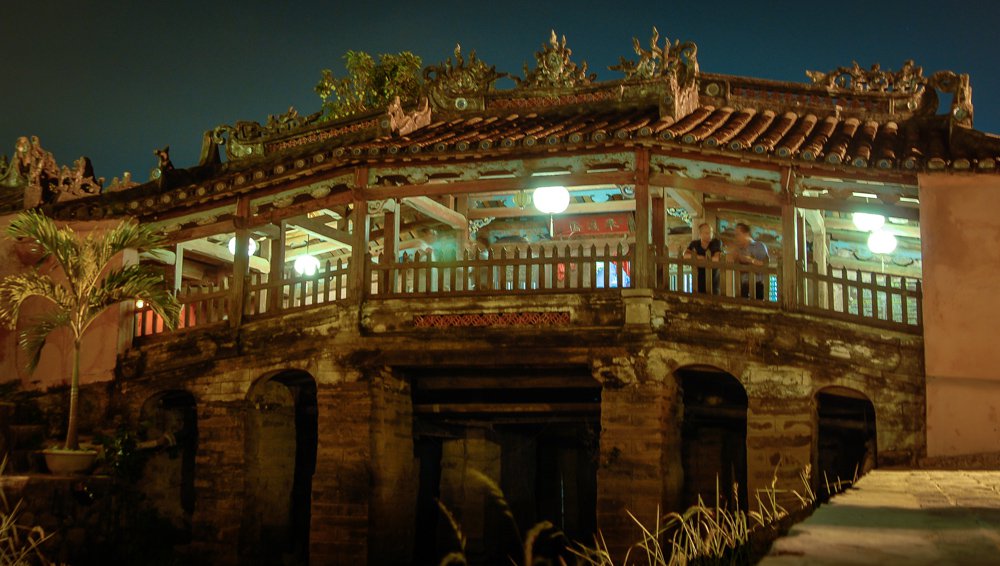 Hoi An offers a number of interesting places to visit:

Japanese Bridge (Chua Cau): To start with the most well-known landmark, the Japanese Covered Bridge, on the west end of Tran Phu Street, was constructed by the Japanese community in the early 1600s. Today, it is the symbol of Hoi An. Tran Vo Bac De, the nordic god who controls the weather (obviously important in a maritime community like Hoi An) is honored in a small temple inside the bridge. Quan Cong Temple: Built in 1653, Quan Cong Temple honors a Chinese general of the same name, revered for his loyalty, bravery and integrity. The general's statue is on an altar in the back of sanctuary, flanked by statues of his bodyguard and adopted son. Merchants would pray at Quan Cong for the general's virtues. Museum of Trade Ceramics: The highlight of this museum isn't the rather dusty collection of broken pottery, but the excellent English descriptions of the history of Hoi An and the old house in which the museum is located. No other house in Hoi An will give you such a complete understanding of the town's architecture as this museum does. The Phung Hung House: Just west of the Japanese Bridge, has been in the same family since its construction in 1780. The traditional two-story wooden house features Japanese and Chinese elements. Tan Ky House: A historic house in Hoi An that combines Japanese, Chinese and Vietnamese influences. Chinese poems written in mother-of-pearl are hanging from a number of the columns that hold up the roof. Don't miss the beautiful mosaic inlaid work found in the four small rooms. The Tan family still occupies the house. The Tan Family Home and Chapel: offer a fascinating look at a wealthy Hoi An family of the early 19th century. In 1802, Tan Tu Nhuc, Emperor Gia Long's ambassador to China, built this house and a chapel to worship his ancestors. Not surprisingly, the home is bedecked with Chinese artefacts and gifts. Today the drawing room and the chapel are open to the public. The drawing room features a center section which is a place for the family's ancestors to return home and therefore only open during the Tet festival (New Year Festival). Congregation halls: Throughout the town of Hoi An there are numerous congregation halls, where Chinese expatriates socialized and held meetings. They are typically named after the home region of their members, such as Fukien and Canton. Here are a few of the larger examples: Cantonese Assembly Hall: Built in 1885 from materials brought in from China, the hall is elaborately decorated. Interestingly, many of the statues in the hall depict characters from famous Chinese operas. The calm courtyard in back is also adorned with ornate statues, including a ceramic dragon lurking in a fountain. Fukien Assembly Hall: This impressive assembly hall, dating back to 1697, was built by Chinese merchants from Fukien Province in southern China. Animal lovers will enjoy the unicorn, dragon, turtle and fish sculptures, each with its own symbolism. Sailors honored Thien Hau, the sea goddess, with a temple inside the hall. She's flanked by Thuan Phong Nhi, a goddess who can hear ships from thousands of miles away, and Thien Ly Nhan, a gimlet-eyed goddess who can see them from the same distance. Meanwhile, the hall is also a place of worship for a prosperity god and a fertility goddess. Local couples hoping to start families worship her for good luck. Chinese All-Community Meeting Hall: Another interesting assembly hall, this one welcomed all members of the Chinese community. It was founded in 1773 and incorporates French architecture as well. Full Moon Festival (Old Town Night): Held each month 14 days after the new moon - about the time the moon is full - the Old Town becomes even more charming when the shop owners turn off the electricity and hang lanterns from their storefronts. At the same time, a procession of small floats winds its way through the streets and along the river by candle light. If you are lucky and the time is right, try to catch the Full Moon Festival, when hundreds of lanterns cast the Old Town in a magical glow. During this hour, all electric lights are turned off. Try to rent a rowing boat to be in the middle of the milky-way full of lanterns on the river. Side trips from Hoi An

Cua Dai Beach: Just a few miles from Hoi An, Cua Dai beach is a nice getaway. You can cycle there from Hoi An, which gives you a great view of the countryside. Along the beach there are a number of small restaurants selling seafood and drinks, many of which provide deck chairs and tables right on the water's edge. Vendors usually stroll along the beach offering fresh fruit. The tides here can be dangerous, however, so keep an eye on children. If you're looking to combine the cultural sightseeing in Hoi An with a day at the seaside, simply head over to the lovely beach at Cua Dai. Cham Island Tour: You can easily combine a visit to Cua Dai beach with a tour of Cham Island, just three miles off shore. The Cham people, one of Vietnam's many ethnic groups, are an Austro-Asiatic people who have fished from this island for centuries. Allow about half a day for the tour, which can be arranged from Cua Dai or Hoi An. My Son Champa Sanctuary: If you're interested in seeing more of the Cham culture, don't miss My Son. Twenty-five miles south-east from Hoi An, My Son was the religious center of the Cham Empire at the height of its power from the 7th to the 12th century. At My Son, the Cham, followers of Hinduism, buried their kings and built temples and monuments to honor Shiva. The complex shows Vietnamese, Indonesian and Indian influences. Sadly, many of the structures were destroyed in the Vietnam War, but My Son, which is a UNESCO World Heritage Site since 1999, remains a moving, contemplative place.

Tailored clothing: Made-to-measure shirts, blouses, dresses and jackets are available from the renowned tailors of Hoi An. When last counted in 2002, there were 140 shops in the city, and the number is now well over 400. With any tailor, be sure to negotiate before you agree to a price. Art and galleries: Hoi An also has a good selection of Vietnamese art, both modern and traditional, serious and kitschy. Galleries can be found all over town but the cultural heart of Hoi An with most galleries is in Nguyen Thi Minh Khai Street, on the other side of the Japanese Bridge. Thanh Ha Pottery Village: About a mile west of town, this traditional village has been making pottery for more than 450 years. Eating Food in Hoi An is, even by high Vietnamese standards, cheap and tasty. In addition to standard Vietnamese dishes, there are three dishes that Hoi An is particularly famous for:

Cao Lầu: is a dish of rice noodles which are not quite as slippery as Phở and a bit closer in texture to pasta. The secret is the water used to make it; authentic Cao Lầu is said to be made only with water from a special well in the city. The noodles are topped with slices of roast pork, dough fritters and lots of fresh herbs and vegetables. Bánh Bao Vạc (white rose): is a type of shrimp dumpling made from lucent white dough bunched up to look like a rose. Wonton dumplings: Essentially the same as the Chinese kind, are served up in soup or deep-fried.