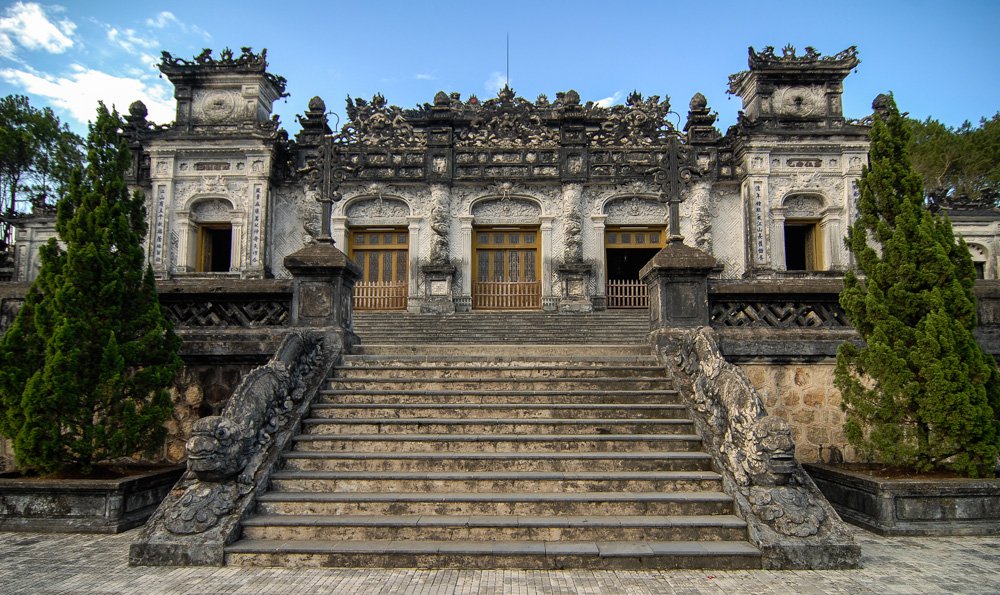 Emperor Khải Định, who ruled 1916-1925, has chosen slope of Chau Chu mountain, 10 km from Hue, as the location to build his tomb. The construction of the tomb was started on 1920 and lasted for 11 years. The architecture of this tomb is the most criticized of all the tombs of the Nguyen dynasty. The structure of the tomb (admission fee: 55.000 Dong) is of concrete elements with cement, a mixture of Vietnamese and Western concepts. It can be seen as an attempt of fusion building style or a symbol of the decline of Vietnamese culture during the colonial era; it depends on your view and mood.

Compared to other emperor tombs in Hue, Khải Định Tomb is much smaller. The overall construction of the tomb is a hill-site emerging rectangular structure with 127 steps. At the entrance, one should climb a 37 steps gate with dragons as side walls. Some 30 steps further one arrives at the imperial audience court, with an octagonal stele monument, again made of reinforced concrete. On both sides of the courtyard, there are two rows of statues facing towards the center, together with other statues representing bodyguard soldiers. These statues are made of stone, not in concrete, which is rare in Khai Dinh Tomb.

Going up one more level one reaches the altar area. This complex with the Khai Thanh Palace, the main room of the Thien Dinh palace, has many rooms connecting to each other. The walls are densely decorated – almost comparable to Rokkoko style – with inlaid of elaborate glass and porcelain designs. The floor is covered with tile with decent flower design, the ceiling painted with nine dragons in fine fleeting clouds. The rear room of the Khai Thanh palace hosts the main temple, with a statue of Khai Dinh, his grave and his altar. The most noticeable characteristic of the tomb is the glassy and ceramic mosaics, a masterpiece of Vietnamese artisans early in the 20th century.