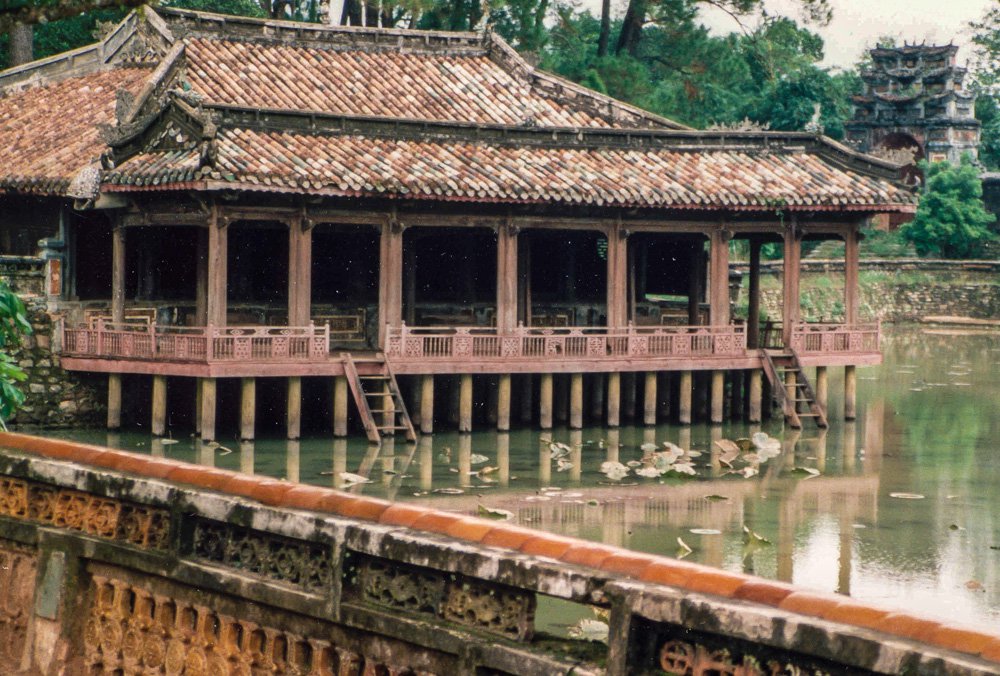 Located in a narrow valley 8 km from Hue (Duong Xuan Thuong village), Tự Đức Tomb is one of the most beautifully designed complexes among the tombs of the Nguyen dynasty. Embedded in a lush pine forest, this tomb is the final resting place of Emperor Tự Đức (1848-83) who had the longest reign of all emperors of the Nguyen dynasty. As usual at that time, Tự Đức had begun planning and constructing his tomb long before he died in 1883. Thus, the major parts of the tomb complex were built around 1864-67. In his lifetime, the Emperor Tự Đức used the tomb as a palatial retreat together with his many wives and concubines.

The enormous costs, extra taxation and forced labor necessary to build the tomb caused protest among the workers, who attempted a coup in 1866. With the help of his generals Tự Đức was able to suppress the coup and continued enjoying the palace within the tomb for the remainder of his life. The royal amenities available at this tomb are unmatched by any other such structure in Vietnam. Although the Emperor had over a hundred wives and concubines, he did not have any offspring. Lacking a son to write his biography and merits, which would be part of the stele inscription, the task fell to himself, a circumstance he considered to be a bad omen. His modest self-composed epitaph can now be found inscribed on the stele in the pavilion, to the east of the tomb. The stele for Tự Đức Tomb was brought there from a quarry over 500 km away, and it is the largest of its type in Viet Nam. It took four years to complete the transport. The tomb’s palace area has a lake where the Emperor used to boat, a small game hunting ground on a tiny island inmidst the lake, and the luxurious Xung Khiem Pavilion where Tu Duc is said to have retreated to relax and recite or compose poetry in the company of his concubines.

Inside the complex, which measures 12 ha in surface, there are about 50 gates, buildings, terraces and pavilions. All of the names of the constructions include the word "Khiem" (modesty). The tomb is divided into two main parts: the temple area and the tomb area itself. The temple area starts with the Vu Khiem entrance and the romantic Luu Khiem lake. On the lake, there are Xung Khiem Pavilion and Du Khiem Pavilion. The temple part continues with three Thanh stone steps to Khiem Cung Gate leading to Hoa Khiem Palace, which was the Emperor’s working place and is now used as an altar devoted to the Emperor and Empress. On its sides, there are Phap Khiem House and Le Khiem House for the military and civil mandarins.

The tomb area consists of the Honour Courtyard (Bai Dinh), the Stele Pavilion, and the sepulcher. Right behind the Honour Courtyard, after walking past two rows of statues of high-rank military and civil mandarins, which are deliberately made shorter than the emperor, visitors arrive at the Stele Pavilion (Bi Dinh). It is interesting to know that Tự Đức’s self-written inscription includes not only his achievements - like in other tombs - but also mentions his misadventures, mistakes and diseases. On the hillside opposite the semi-circular Tieu Khiem Tri Lake, there is the Buu Thanh brick wall. In the middle, there is a stone house, where the Emperor was to be buried. The most interesting part about this tomb is that despite the grandeur of the site and the amount of time Tu Duc spent there, he was actually buried in a different, secret location somewhere in Hue. Even today, the mystery of Tự Đức’s hidden, real tomb still keeps many historians busy.