3 million for the Backstreet Boys 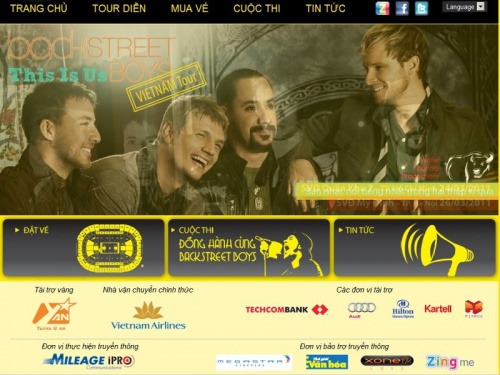 It is known for some time that the Backstreet Boys will go on a world tour and, therefore, give two concerts in Vietnam. Lan had indicated that she is interested in this concert. Exactly one week ago, the sales of the tickets began, and since then she is reminding me every day. So I allowed myself to be persuaded to purchase two tickets. The crush at the box office wasn’t as great as I had expected. Of the 55,000 tickets for the concert, however, 30,000 should already be sold by now. I don’t know yet whether I will go there with Lan. We surely canot let her go alone to the concert. But Phương has already declined the offer with thanks and Thao didn’t seem very enthusiastic about it either. Maybe she will think about it. Because I also don’t like to go. That’s more teeny music. Or am I wrong? Maybe it’s worth going? The ticket prices are quite high for Vietnamese conditions. Who made this up? The cheapest tickets cost 500,000 VNĐ. The most expensive tickets of two million VNĐ were sold out yesterday. That’s why I paid three million for two tickets. That are more than 100 €. Just as a comparison: three million VNĐ is almost exactly the amount that Phương earns at Hanoi TV per month. And this isn’t a bad salary. Many people have to be satisfied with far less, and thus cannot afford a live concert. The concert takes place in My Dinh National Stadium on March 26 at 7 pm. Two days earlier the Backstreet Boys will be on stage in Ho Chi Minh City. Best regards Cathrin Cathrin’s Blog: Zwischen Traditionen und Moderne