Chợ Hôm – An old market with a special flair 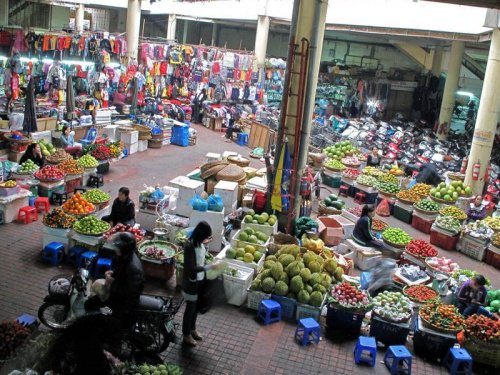 In Hanoi arise more and more modern shopping centers and supermarkets. But there are still some places where you can experience the old original Hanoi. The Chợ Hôm market at the intersection of Phố Tran Xuan Soan and Phố Hue in the district of Hai Ba Trung belongs to these rare places. The origins of the market are not documented. Probably it was founded in the late 19th Century, when more and more small stalls settled there, which eventually developed into a wholesome market. The busy market experienced during its history many ups and downs. Originally it had opened only in the late afternoon. At that time sold were cheap goods for daily needs. Only in the early 20th Century, when more and more merchants settled, it went over to a full-day opening. Today, the Chợ Hôm is a window into the old Hanoi. On the ground floor there are sold especially fresh fruits and vegetables, groceries and clothing. On the upper floor is the fuel market. Quality goods from around the country are offered there. Therefore, the prices are often a bit higher than elsewhere. Nevertheless, the market is very well attended. Many housewives do their daily shopping here. The selection of fresh fish, prawns and crabs is in Hanoi nowhere as big as at the Chợ Hôm. And the vegetables is mostly as fresh as if it had just harvested. Who has no time or desire to cook, can enjoy traditionally prepared dishes on one of the many food stalls such as fish soup and various duck dishes. Best wishes Cathrin Cathrin’s Blog: Zwischen Traditionen und Moderne [nggallery id=19]