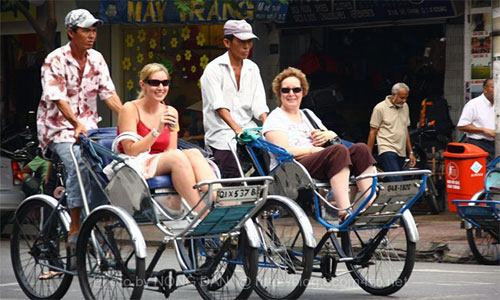 “Vietnam has gradually improved its quality for tourism and has won the hearts of many international visitors. Vietnam is an ideal destination for tourists and a safe country.” (Nguyễn Mạnh Cường, stellvertretender Direktor der Vietnam National Administration of Tourism) Last year, 6.02 million foreign tourists visited Vietnam. This was an increase of 19 percent compared to the year 2010. The turnover of the tourism industry amounted to 6.2 billion dollars, correspond to about 5 percent of GDP. Optimistic forecasts for the year 2020 assume from 10 million visitors and a turnover of 33 billion dollars. But unfortunately, the country seems to gamble away his newly gained reputation again. Complaints about rude people, fraud and rip has been around longer. Lately they heaped . Almost two years ago, I had reported about an extreme example of Hanoi: the tourist trap of Hồ Hoàn Kiếm The conclusion of many visitors, with whom I see myself sometimes confronted in various travel forums is often: “Once Vietnam is enough, we do not come back.” This trend is confirmed by polls, after which the number of “repetition offender ” in Vietnam is much lower than for example in Thailand. Especially among the taxi drivers seem to be many black sheep. Giant detours are driven to coin it vigorously afterwards. Sometimes there are required absolute fantasy prices. Restaurants, food stalls and peddlers are frequently criticized. However not only foreign tourists or foreigners living in Vietnam are affected by inflated prices, but also Vietnamese tourists who travel in their home country. Since then there can be paid twice for a bowl of noodle soup than the locals pay. Many Vietnamese believe that foreign tourists are immensely rich and spend only a small part of their big taxing capital assets for a trip to Vietnam. It is virtually impossible to argue against. My objections that most of the people have to save for a year or often several years in order to be able to afford such a trip, and that I’ve earned my travel money earlier, when I was a schoolgirl, by filling shaves in the supermarket in the winter and Easter holidays, will not be taken to note. The mentality, to earn quickly lots of money with the tourists seems more and more rampant. But that the long-term a lot of damage can be done, most do not realize. Should this short-term thinking not change in foreseeable future, the tourists will eventually relocate to countries where they will receive friendly. Best regards, Cathrin Cathrin’s Blog: Zwischen Traditionen und Moderne