Da Nang – a city of contrasts 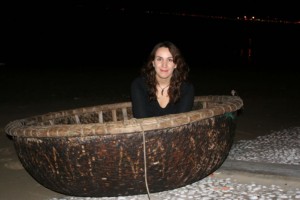 In no other city in Vietnam the differences have been so clearly shown to me as in Da Nang. The city in Central Vietnam radiates its charm: On the one hand, many small fishing boats are clustering on the sea. Vietnamese children play soccer on the beach. The streets are very quiet, so you can easily drive scooter even as a foreigner. On the other hand, countless modern sculptures adorn the waterside promenade. The streets are decorated with strings of lights. Even the bridges light up in different colors. On the road from Da Nang to Hoi An one luxury resort will be built after the other. Da Nang is booming and attracts expats. In the evening they are bustling preferably in the Bamboo Bar (Bach Dang Street). Hoang Anh, with whom I spent a day in Da Nang, tells me how well she likes it here. But despite the superficial optimism and adaptation to the West, most Vietnamese have still a very conservative thinking. Hoang Anh told me about the pressure under which she is as a 24-year-old woman to find a man to marry. And that many of her friends are already married and have children. Often, people here get married only a few months after the first meeting. However, Hoang Anh is not impressed by that. She takes it with humor. Her roommate calls her “Husband”. She laughingly says that a fortune teller predicted her she will get to know the right man this year. If that is true? We can be curious. Da Nang really fascinated me in any case, because of its differences and blending of tradition and modernism. Check out: Seafood Restaurant Cá Voi Xanh – Blue Whale: Very good seafood, friendly service, right on the beach. Karty Coffee (5 Le Duan Street): Very nice coffee house, with lights and colorful lanterns in the garden, very chic interior, low-cost. Translated by Caterina   [nggallery id=4]