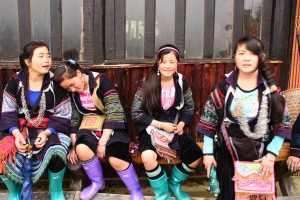 I booked the next tour at my hotel. 12 USD for a full day hike, including entrance fees to the villages, lunch and a minibus that brings me back to the hotel at the end of the day. I was the only one who had booked the tour on that day, which had the advantage that I could speak in detail to my guide, the 17-year-old Lan. She belongs to the group of Black H’mong. According to Lan, 53% H’Mong and 23% Red Dzao live in the mountains around Sapa. These are the largest groups of ethnic minorities in Vietnam. Lan told me about the life of the Black H’mong. Each ethnic minority has its own language. They only learn Vietnamese at school. Among the H’mong are many sub-groups, differing from each other and wearing different costumes: the Black H’Mong are known by their indigo costumes, Flower-H’Mong are dressed very colorful. When they get into contact with other minorities, H’Mong people communicate in Vietnamese. Lan learned English from the tourists, like all people from her village. She cannot write in English, but speaks very well. Lan went to school for nine years. But many other H’Mong children attend school only until the 4th class. Anyway, all they need to know they learned much earlier, said Lan. The girls already cook at the age of eight and look after their younger siblings much earlier. It is not uncommon to have 10 children here. They often marry at the age of 13 or 14. While talking about her life, Lan leads me on slippery, steep trails and past rice terraces to Lao Chai, where she comes from. The further we got down, the clearer the view. The fog is caught on the mountain peaks. When I was standing in the middle of a huge rice terrace, a few buffalos next to me, I could finally understand the fascination Sapa. I enjoyed walking through the nature, having a local by my side. Apart from the beautiful rice terraces, there is not much to see in Lao Chai and Ta Van. A few craft shops, many children and animals. Nevertheless, a welcome change to the metropolis of Hanoi! But I was also a little wistful: Originally I had booked a tour to Giang Ta Chai, which is 17 kilometers away and home to the Red Dzao. Unfortunately, the Tour Office didn’t inform Lan, so I had to return to Sapa after visiting Ta Van. As compensation I got a tour for free to Cat Cat and Sin Chai for the next day.. Translated by Caterina