Day 3 in Sapa: With a Red Dzao to Cat Cat and Sin Chai 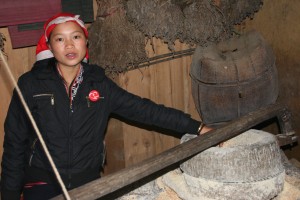 May in Cat Cat On my third day in Sapa a Red Dzao picked me up. Her name was May, she was 19 years old, already married and pregnant in the second month. Until shortly before the birth she wanted to lead tourists through the villages around Sapa. Red Dzaos can be recognized by the shaved off front hair and eyebrows. May added some things to what Lan, my guide from the first day, has told me. Many of the minority peoples already marry very young, but officially a marriage is not allowed (i.e. by the government) until the age of 18. Also, one should not have more than 2-3 children, otherwise one must – as in the whole country – pay for them or expect payroll deductions. I first walked to the 3-4 km away Cat Cat with May – once again I had my guide just for me. But Cat Cat was too touristic. So many Vietnamese in a heap, I only know from Hanoi’s traffic. To get to Cat Cat, one walks a very long staircase down to the valley. Left and right H’Mong were standing, praising their goods continuously. The waterfall in the valley itself was quite nice. Sin Chai was much quieter than Cat Cat. On the way to Sin Chai we couldn’t see any tourists far and wide. Once there, I could understand why: There was just nothing. The main attraction was ten shoats by the wayside. From Sin Chai May and I have taken a Xe Om to Sapa (50,000 VND for both). Shortly thereafter, I went back to Hanoi with the sleeper bus. The return trip was even worse than the outward journey, as all the people around me were sick, coughed, or were vomiting. On the seat next to me, a young Vietnamese mother and her son were sleeping. The little boy had several coughing fits at night. My conclusion: The landscape around Sapa is truly unique. But you should walk away from the usual tourist routes. Ethnictravel is a good provider for it. A fit person could climb the Fansipan, Vietnam’s highest mountain, in three to four days. The sleeper bus is only for tough ones who do not need privacy, sleep and toilets. Translated by Caterina