Released
May 05th, 2011 6:11AM
By
sabrina
Category
Travel, Attractions 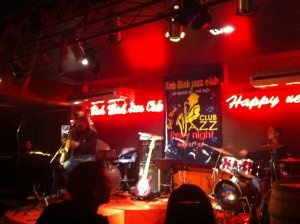 I have deliberately waited a while, before I wrote this blog entry. If I had written it a few days after my arrival, I would have headlined: “They eat dogs in Vietnam.” Yes, not only in China but also in Vietnam dog is considered a delicacy. Similarly, Vietnamese like to eat incubated eggs. While wandering through the maze of streets of Hanoi, I’ve also seen brain and other viscera lying on the dining tables in the streets. But meanwhile I’ve found some places, where you can eat very well. Unfortunately, most restaurants and bars close at 10 p.m. There are only a few exceptions, and they are not that bad. My favourite: Minh Minh’s Jazz Bar! The jazz sounds are a real blessing compared to the regular morning propaganda sounding. At this point I would like to recommend my favorite restaurants and bars in Hanoi. Restaurants: – Puku Café & Bar: Here mainly younger people can be found. They offer Western and Vietnamese food. Seating is available in the entire house, even on the roof terrace! Opening times: 24 / 7. 16/18 Tong Duy Tan Street (near Hang Bong). – Koto: The koto is run by former street children. It is across from the Literature Temple. Very stylish interior and very good food. – Avalon: Avalon is both a café and restaurant. It is located on the north side of the Hoan Kiem Lake and has several floors. From the balcony you can look down directly over the lake. – Foodshop 45: Indisches Restaurant mit mehreren Räumen. In einem davon kann man sich auf den Boden setzen. Gutes Essen und sehr leckere Lassis! 59 Truc Bach Street am West Lake. – Pho 24: Indian restaurant with several rooms. In one of them you can sit on the floor. Good food and very tasty lassis! 59 Truc Bach Street on the West Lake. – Ca Phe Sua Chua: This is not the name of a café, but a specialty of Hanoi – coffee with yogurt! The best Ca Phe Sua you get in a tiny shop next to the Vien Goethe / Goethe-Institute, 58 Nguyen Thai Hoc, near the Literature Temple. The owner, an elderly lady, is always delighted in guests and for regulars she even gets out the new, slightly larger plastic chairs! – Kebab in front of the Goethe-Institute: Here you get the best kebab in town for only 20,000 VND (1 U.S. dollar)! The owner of the snack bar is already a millionaire, at least, Dong-millionaire. Bars: – Temple Bar: One of the few locations that is open for longer, namely to 2.30 a.m. Here you can meet the night owls of the city, both expats and Vietnamese. My highlight of St. Patrick’s Day was a bunch of jolly Irish men, who were dressed as goblins and have performed a goblin dance on stage. Mostly Euro Trash is being played. If you stay until the end, the music is getting better. 8 Hang Buom. – Minh Minhs Jazz Bar: Truly a jewel in the middle of Hanoi’s Old Quarter, the heart of the city. The owner Minh is professor at the local Academy of Music and is onstage every night. If he does not play, he sits down with the guests and smokes a pipe. 65 Quan Su, near the train station. Translated by Caterina tbc.