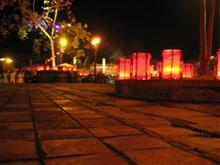 Since 2000 Hue has started a quite successful cultural festival every two years. The next biannual Huế festival will be held from June 5-13, 2010. This is a meanwhile renowned national tourism and culture event. We still remember attending the festival in 2008, which is quite impressive and well-selected. Our absolute highlight was the Royal Night (Dem Hoang Cung), which is atmospherically something very special, from the setting (inside citadel), the show (it could be, with some imagination, the ancient palace life) and the food (nicely decorated). Illuminated Ngo Mon Gate at Hue festival 2008 (Photo Pries) Street musicians from Europe at Hue Festival 2008 The theme of next year’s Hue Festival is “Cultural heritage with integration and development”. The festival will be linked with the 1000th Thang Long – Hanoi anniversary, 375th anniversary of Hue as the capital of the southern region and 50th anniversary of the Hanoi-Hue-Saigon relations as the three representative cities of the northern, the central and the southern regions. The major partner will be France, as in previous festivals, with the participation of countries from five continents and art troupes from Hanoi, Hue, HCM City and provinces which host (UNESCO) world heritage sites. Besides traditional art items like the opening and closing ceremonies, the “ao dai” festival, the royal palace night (Dem Hoang Cung), the legend of the Perfume River (Huong Giang), and the rituals of Dan Nam Giao, the Hue Festival 2010 seems to open to new events. According to the festival advertisement, new shows like Oriental night, the itinerary to the south are in planning. Ao dai impression Procession at Dem Hoang Cung, Hue festival 2008 Waiting for the Royal NightRoyal Night, Hue festival 2008 Royal night at Hue festival 2008 (Photo Pries) Hue Festival 2008 Once every two years, the Hue Festival is one of the attractive events organized in the ancient capital. 2008 was the fifth held in Hue City. The Hue Festival with the Nam Giao rite, Royal palace night, and Ao dai (long dress) celebration, is performed to foster the growing tourism in Central Viet Nam. There were four new rites introduced in 2008: Xa Tac rite, Martial Art Doctorate Contest (Tien si vo), Quang Trung Emperor coronation and Perfume river (Huong river) legend. The Nam Giao rite is especially associated with the Hue imperial palace. In ancient times, the Hue court celebrate this worship to “pray for peace and wealth” of the nation. Royal palace night (Dem Hoang Cung) reflected the colorful life in the royal palace when night falls. The whole City of Hue was decorated to make it look more charming and splendid. From the 3rd to 6th June, the Ao dai celebration was held, characteristic of the Hue festival. Models and Hue girls appeared wearing the traditional long dress in an innovative style, at the Hien Nhon imperial gate. Xa Tac is also an imperial palace rite. In the spring and autumn, the Nguyen dynasty kings made an offering to the Ground God (Xa) and the Cereal God (Tac). They hoped for a peaceful life and a rich harvest. Martial Art Contest (Tien si vo) is a combative rite in the festival to honor traditional Vietnamese military training and expressed a joyful atmosphere. The event is planned to be performed in Phu Van Lau and Nghinh Lương Đình square. In the 2008 Festival, the coronation of the Emperor Quang Trung will be introduced, in celebration of the defeat of Chinese invaders in the 18th century. The coronation was celebrated at Ban Mountain in 1788. Beside traditional rites, Hue Festival visitors are able to contemplate and appreciate the natural beauty of the old capital. The “Huong river legend” (Huyen Thoai Song Huong) would be a tour from the upper to the lower river to discover and experience the river legend. It is atmospheric very nice  to enjoy the beauty of the river from sunset to late into the night. The characteristic of this festival is its mix of many cultural colors. Besides troupes from the host country, there were others from Cambodia, Thailand, China, Japan, Korea, with art troupes from America, Europe to make the festival an increasingly attractive biannual event. 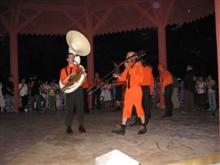 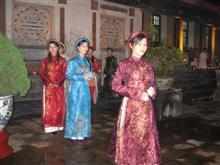 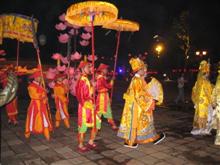 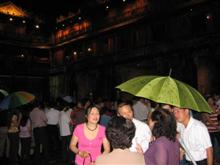