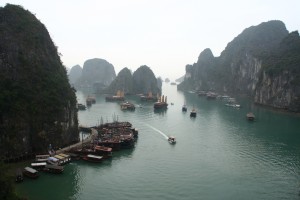 At least since “Tomorrow Never Dies”, where James Bond has declared war on bad guys in the Ha Long Bay, the UNESCO world cultural heritage is a real tourist magnet. And I have to say: Rightly so! Before we were allowed to board our junk, it has long been reviewed by the water police. “Security measures “, said our tour guide Tony. After the ship accident in February with several deaths that was a good thing. Together with 13 other passengers I sailed across the sea for two days: on the first day around the Ha Long Bay, on the second day we went to the more unknown Bai Tu Long Bay. The booked tour included the all-round fun package. Everything was planned with military precision. After a welcome drink and lunch we stopped at a dripstone cave, from whose entrance we had a great view of the bay. After that we had the opportunity to kayak or swim. Shortly afterwards it was time for dinner. Fortunately, Toni’s proposal to organize a karaoke night fell on deaf ears. While some of the passengers on board were fishing, I enjoyed the sight of twinkling lights on the water. At 7 p.m. it was already pitch-black and other boats have landed around. Their lights were reflected in the water. And would have almost ensured a romantic mood, if there would not have been booming Celine Dion and Elton John music from the dining room. The next day should be far less touristy. Even more beautiful and idyllic is the Bai Tu Long Bay toward the east, a small offshoot of the Ha Long Bay. As our boat was cruising through the bay early in the morning, no other boat was there. It was a bit mystical sailing through the fog on the sun deck of the only ship far and wide, past thousands of rocks rising from the water. Really relaxing and (still) an insider’s tip! Translated by Caterina