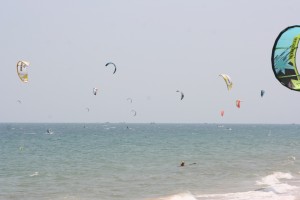 After Valentin raved so much about Mui Ne, I’ve decided to go there as well and attend a crash course in kite surfing. In 4.5 hours I learned at KBA (Kiteboarding Asia) some theory first (keyword: “Wind-Window”) and how to set up a kite. After I was allowed to steer a small training-kite myself, I had to deal with a big kite. The steering onshore went quite well. However, in the water I was struggling against the waves and had trouble keeping my kite in position. Despite some initial difficulties, it was really fun to be pulled through the water by the kite (which incidentally is called Body dragging in the jargon). After doing sports, I met a very nice spa-owner. Fortunately! I let myself go well there for 2.5 hours: Thai massage, hot stone massage, manicure, pedicure and washing hair. And that for only 15 USD! Life as it should be! Mui Ne is not only a paradise for kitesurfers and spa enthusiasts. The landscape around Mui Ne, especially the red and white sand dunes, but also the canyon with the so-called “Fairy Stream” are beautiful. Tip: Do not walk along the Fairy Stream alone. Namely, a gang of youths is waiting there and asks tourists for money; if they do not get it, they get angry and sometimes even throw stones … Translated by Caterina