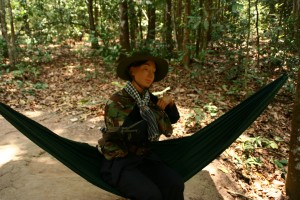 An absolute must for any visitor in Saigon are the Cu Chi Tunnels. Every day, mostly Western visitors are lead through the former tunnel system of Viet Cong. Once there, we firstly received some propaganda from a Viet Cong veteran. He proudly told about the indomitable Viet Cong, how they escaped from the Americans and how they often trapped them. Losses on the Vietnamese side were not mentioned. But a film has been shown that demonstrated the war atrocities, particularly the effects of Agent Orange. An American in the first row was promptly insulted. Using a miniature model our “teacher” showed us the multi-layered, yard-deep tunnel system, before we could consider it with our own eyes. And we were not only allowed to watch it. We also got the chance to crawl into the tunnel. It was dark and tight. The tunnels, however, have already been extended a few centimeters for the Western tourists. It may be hard to imagine that the VC have lived in such a limited space under the ground for years. The subterranean kitchen had a special chimney, which was barely visible from the outside. We were also able to enjoy a real VC-meal consisting of tea and bananas with sesame salt. By the way, throughout the whole camp there have been arranged lifelike dolls in the VC outfit that e.g. should demonstrate how the real Viet Cong prepared bombs with dynamite. Furthermore, a shoemaker showed us how original VC-shoes are made: The trick is to be able to put on the sandals right and wrong way. Thus the enemy was lured to the wrong path, directly into the next trap. The Viet Cong have developed a variety of traps, with falling-in and spearing effect. During the whole jungle roundtrip we heard shots. They came from the “military camp”, a shooting range, where visitors were able to shoot with machine guns on dummies. My next stop was the War Museum in Saigon. Previously it was known as the “Museum of American War Crimes.” On three floors the Vietnam War is shown from the perspective of the Vietnamese and the former Western opponents of war. Despite one-sided reporting and not always credible pictures I found the museum very interesting. And for a price of 15,000 VND (0,50 €) probably affordable for everyone. The cityscape of Saigon is marked by some beautiful old French buildings, like the opera or the People Committee Hall. By the way, from the rooftop restaurant of the Rex hotel one has a beautiful view of them. In general, to me people in the south (as it was the same in Central Vietnam) seemed much friendlier and open-minded than in the north. Saigon is very modern, traffic is organized, the street vendors are not pushy, and many can speak English well. Nevertheless, for me it was almost a bit too western. A visit to the shopping mall I felt as fairly boring. At Ben Thanh Market it was more exciting, turbulent, colorful and noisy. There I had my fun to haggle with the merchants over prizes. Whether there is a Vietnamization already in progress here? The culture shock when I’m back in Germany is bound to occur. Translated by Caterina