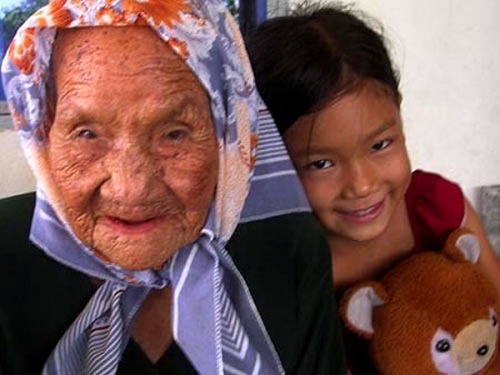 Bà Trần Thị Viết Trần Thị Viết will be 119 years in 2011 but her memories of events and people from the las three centuries are still clear. The oldest woman of Vietnam, whose offspring includes almost 500 grandchildren, great-grandchildren and great-great-grandchildren, counts to one of the country’s heroic mothers. Born in Long An in the Mekong Delta in 1892, Tran Thi Viet married at the age of 21. She gave life to eight sons and two daughters. She was illiterate and her family too poor to enable the children a good education. Seven of her sons died in the fight against the French or Americans. In 1953, her eldest son, Nguyen Van Lien, was killed at the age of 37 in the fight against the French. He left behind three children. Seven years later another son, Nguyen Van Tao, died. In 1961, her husband succumbed injuries he had sustained during the battle against the French. In 1962 and 1963, two other sons, Nguyen Van Kien and Nguyen Van Tri lost their lives. The youngest son, Nguyen Van Zau, was deadly defeated by the Americans in 1968. In 1973, two other sons of her died on the battlefield the same day. Their mortal remains had never been found. Despite these blows of fate that almost broke her heart, she continued to support her grandchildren as well as her daughters-in-law who had lost their husbands. She went fishing and accepted any job to secure a living. Today Viet Tran Thi lives with one of her grandsons and his wife in the town of Tuyen Binh Tay in the province of Long An. In 1994, she was awarded the title Bà me Việt Nam anh hung (Heroic Mother of the People). Despite the fortune to have a large family with many descendants, her grief has not faded, even after so many years. A granddaughter told the newspaper reporter: “When Grandma lies in the hammock, I often see tears in her eyes. When I ask her whether everything is alright, she remains silent for a while and then she says: ‘I miss your father and your uncles.’” Best regards Cathrin Cathrin’s Blog: Zwischen Traditionen und Moderne3