The Paracel Islands in an old textbook 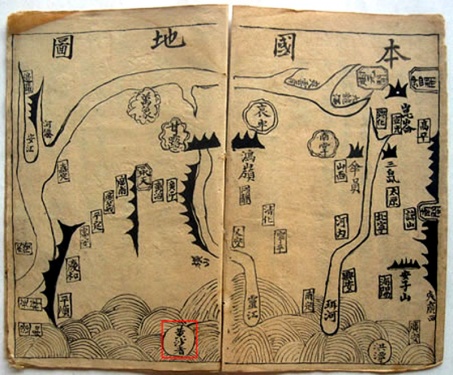 Vietnam’s claim to the Paracel and Spratly Islands is based mainly on old documents and maps that shall prove the island groups belong to the Vietnamese territory for several hundred years now. In no particular order I would like to introduce some of these documents. Khải Đồng Thuyết Ước is a textbook from the period of the Nguyen Dynasty (1802-1945). It was first printed in 1853, experienced five reprints and was used in all schools in Vietnam as a textbook during the reign of Emperor Tự Đức (reigned from 1847-1883). The four volumes of the corpus were written by three different authors in the traditional Vietnamese script Chữ nôm, which is based on Chinese characters. Each volume consists of 44 pages, each with two sheets and eight columns that are not only visually but also in terms of language a masterpiece. In each column there are 16 characters that form eight words. Four words always form a sentence. Each two sentences are connected by rhymes. This should facilitate the children’s learning in those days. The book contains a comprehensive knowledge of topics related to Vietnamese history, nature and society, maps of Vietnam, images of the sun, the moon and the human body. On pages 15 and 16 there is a map of Vietnam. There, the Paracel Islands are marked as belonging to Vietnam (in the map above in the red square). According to Vietnamese scientists Vietnam’s sovereignty over the Hoàng Sa Chử, as they are called on the map, during the period of the Nguyen Dynasty is thus clearly proved. One of the few surviving copies is located in the Chữ Nôm Institute in the National Library. I could admire it, but was not allowed to flip through it myself. Copies are also not allowed. Too bad. Best wishes Cathrin Translated by Caterina Cathrin’s Blog: Zwischen Traditionen und Moderne