With Easy Rider through Hue 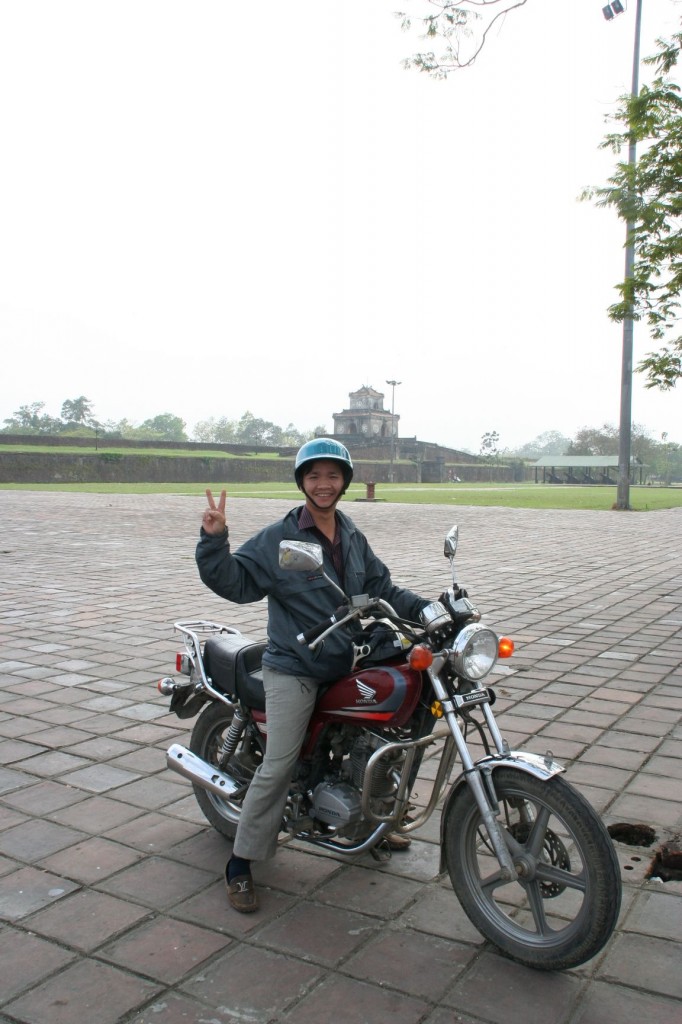 Since all flights were booked out from Hanoi to Hue, I took the night train. Although the 650 km to Hue took 15 hours, it seemed not to be so long for me. I booked a four-compartment for 30 USD. (In comparison, the six-compartment cost only 3 USD less and you can then no longer sit up straight on the bed.) With a Dane and two other Germans in the compartment it was quite entertaining and time went by quickly. If you are in Vietnam you have to take the train one time in any case! It felt like being on a ship with heavy sea. Despite (or maybe because) of that I could sleep well on the train. When I arrived at my hotel in Hue, Thinh, the brother of the hotel manager, asked me if I want to take a sightseeing tour on his motorcycle with him. Price: 12 USD for a day trip. Thinh turned out to be a real Easy Rider. His red motorcycle stood out from the crowd. Thinh did not drive too fast and very safe – in contrast to the Xe Om drivers in Hanoi. (By the way, the Moto Taxi Xe Om is a composition of the words “vehicle” and “hug”!) Furthermore, he always stopped when I wanted to take a picture and he also showed me Hue’s rural area away from the tourist corners. First we went to Tien Mu Pagoda, afterwards to the citadel with the Forbidden City (since 1993 a UNESCO world heritage site) and then to Khai Dinh Tomb and to Tu Duc Mausoleum. Thinh then drove to a small forest, which lies above the Perfume River. There is still an American bunker, a remnant of the “American War” as the Vietnamese call the Vietnam War. The view from above is magnificent and apparently an insider’s tip. At least, there were only two other tourists besides us. Past rice and soybean fields, along forest and field paths, we finally went to the Japanese bridge. There a friend of Thinh, who works in the opposite museum for agricultural machines (House of Agricultural Tools), invited us for a tea. Thanks to Thinh I could do all the sightseeing in one day and had then time to relax. So I can just recommend anyone who wants to visit Hue to look for a driver on site. Translated by Caterina [nggallery id=2]