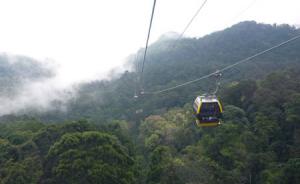 What used to be a lengthy road trip along the spiral steep mountain pass just to reach the province of Ba Na is now a surprisingly short drive from ${bigcity_Da_Nang:"Da Nang"}'s base station aboard an exciting cable car. Short ride, indeed, as the cable-car ride from the foot of the Ba Na Mountain to the peak of the neighboring Vong Nguyet Mountain in the Ba Na-Suoi Mo Tourism Area takes only 15 minutes to complete.

Operators of the cable system, however, make sure any traveler gets the most of their very brief journey. Inside the cable car, tourists are served with drinks as they sit back and admire the breathtaking views they pass along. As they make their way up, the scenes visitors will encounter could never be found elsewhere. Thus, one should savor every minute inside this amazing ride.

This remarkable transportation system is the brainchild of Ba Na Cable Car Service Joint Stock Company, who spent VND300 billion (approximately $17 million) to develop a network of cable cars capable of transporting 1,500 passengers per hour to and from the Ba Na hill station. The system is built up to European standards with Austrian technology and equipment imported from Germany, Switzerland, and Sweden.

Quite a big bite from the US $500 million which the company invested to turn the famous mountain into a tourist destination, but, the cost greatly paid off. Not only the impressive installation significantly increased tourism in the area, it earned Ba Na two entries in the famous Guinness World Records. As the world’s highest selling copyrighted book, of which its annual edition is looked-forward to by millions across the globe, Guinness recognized the Ba Na’s cable car system as the longest nonstop cable car ride (16,500 feet) and the greatest height differential between two cable car terminals (4,230 feet).

Though Vietnam has previously received 11 Guinness world records by far, the award it earned on March 25, 2009 is the country’s first record in the field of science and technology. With the recognition coming from Guinness itself, it greatly helped boost tourism in the place. Shortly after Ba Na’s recent claim to fame, similar systems started popping out in different corners of the world.

Though Vietnam was never the first to use the mode of transit, not even San Francisco who is popularly identified to the cable car network, but it somehow inspired more developing tourist destinations to employ the system. In May of 2009, the Austrian cable car manufacturer Doppelmayr then announced their own 1.5-mile cable car line in Caracas, Venezuela called the "Cable Tren Bolivariano" that will connect two metro stations in the capital. This new installation complements San Agustín del Sur Metrocable system, the only horseshoe-shaped cable car system in the world. Taiwan then announced the July opening for its 96-gondola cable car system linking two popular tourist destinations in central Taiwan -- Sun Moon Lake and the Formosan Aboriginal Culture Village -- cutting tourists’ travel time in half while providing opportunity to enjoy scenic views.

In Durban, South Africa, the cable cars themselves are the tourist attraction. Apart from the Table Mountain Aerial Cableway in Capetown that has ferries over 20-million visitors on an unforgettable ride overlooking the city, Durban's 2010 FIFA World Cup Moses Mabhida stadium announce to feature a $4 million cable car system, which will run along the 106-m high arch spanning the length of the pitch. With Da Nang's very strong potential for tourism, the floating cars will further boost the city’s reputation as among the most interesting destinations in the country.

From the approximate 200,000 visitors it welcomes in the previous years, Da Nang is looking at a huge leap and expects some 1 million visitors annually now that it has more to offer. The ride takes tourists to a fully developed Ba Na Hill Station with even more activities and wonderful encounters for anyone who stops by. Taking that ride to the top will be the best 15-minute climb any tourist will ever experience. The busloads of day-trippers aboard these special cabins you will see today speaks for itself.