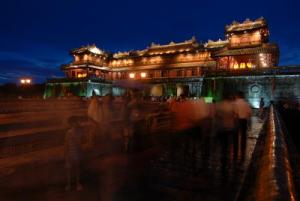 The next biannual Huế festival will be held from June 5-13, 2010. This is a meanwhile renowned national tourism and culture event, which will feature the cultural identity of Vietnam and of the ancient capital ${bigcity_Hue:"Hue"} in particular.

The major partner will be France – like in previous festivals -, with the participation of countries from five continents and art troupes from Hanoi, Hue, HCMC and provinces which host world heritage sites. Besides traditional art items like the opening and closing ceremonies, the “ao dai” festival, the royal palace night (Dem Hoang Cung), the legend of the Perfume River (Huong Giang), and the rituals of Dan Nam Giao, the Hue Festival 2010 will feature new shows like Oriental night, the itinerary to the south, the Hanoi-Hue-Saigon music show and others.