Origin of the Traditional Banh Chung 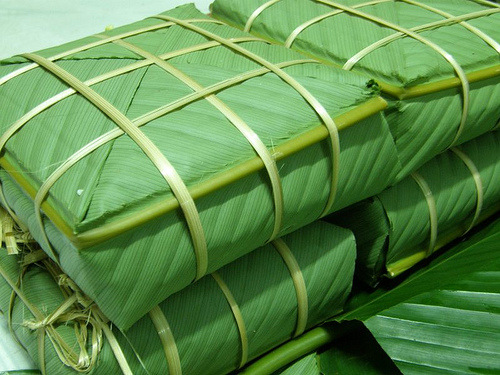 Banh chung (square glutinous rice cake) and banh day (round glutinous rice cake) are the most traditional cakes in the Vietnamese food culture. Symbolizing the sky (as banh day is prepared as white and round) and the earth (the square shape of banh chung represents the ground), these cakes have been adopted by the Vietnamese in their lives and tradition due to the meaning it carries.

These sumptuous treats are available throughout the year. But when Tet is approaching, every Vietnamese family’s table is never without banh chung. During Tet, banh chung is often seen on each family's ancestral altar as a deep gratitude of Vietnamese people to their ancestors.

Both Banh chung and banh day are said to be first made by Lang Lieu prince thousands year ago during the Hung's dynasty. The story roots back to the time when the King Hung Vuong VI of the Hong Bang Dynasty, after defeating the Chinese invaders decided it is time to choose a successor to this throne.

He summoned all of his twenty-two sons and explained that the one who could prepare and bring him the best dish will be the rightful successor. Each prince, wanting to take over the throne, set out on journeys in search for exotic and unusual foods to bring home to the King. They returned with a wide array of dishes such as bears’ paws, rhinoceros’ livers, monkeys’ brains, orangutans’ lips, phoenix meat and peacock sausages.

Among the princes, Prince Lang Lieu was the youngest and poorest, but was the with the purest intentions. Unlike his brothers, he chose to stay behind with his father. He was so poor that he could not afford to buy any exquisite dishes to offer his father. But during his sleep one evening, an old man with white hair appeared in his dream and have acknowledged his devotion to his father, the king. The man expressed how the young prince truly deserves to succeed his father. Revealing that he didn’t have to go far to find the perfect food to offer the king, he taught Lang Lieu that rice, being the most abundant in the kingdom, will yield him a dish worthy to offer to his father and his father’s ancestors.

He taught how the rice must be cooked thoroughly and molded into a round rice cake. Such will be called Banh Day and will symbolize the heavens. The same is to be done to mold the square sticky rice cake, but the latter will be stuffed with cooked bean paste and pork. This is the Banh Chung, and will symbolize the earth. When the prince awoke, he did exactly as he was told in his dream.

When the time came for the sons to present their foods, the King was disappointed with the dishes brought to him. When Lang Lieu came up to offer his two cakes – Banh Day and Banh Chung, the King was delighted and declared them the most delicious. The young price recounted his dream. With that, the King concluded that one so connected with such divine support should handle the affairs of the Kingdom. Lang Lieu became king.

Since then, every Tet celebration held annually, the Vietnamese people cook Banh Chung and Banh Day to use as offerings to their ancestors as well as special gifts to relatives and friends. Today Banh Chung is enjoyed year-round and has become the fast food of Vietnam.