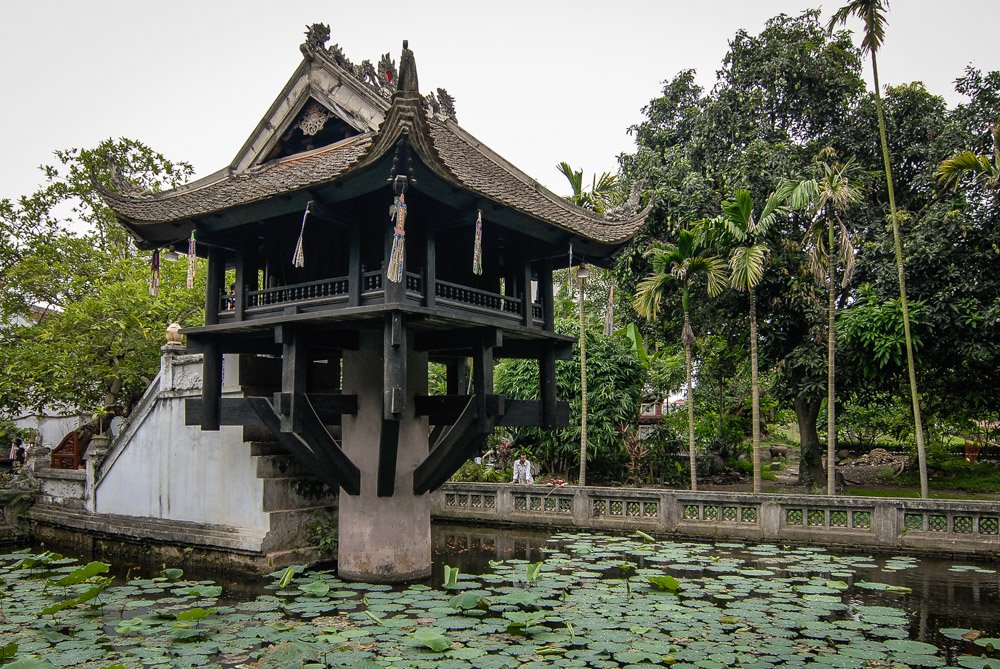 Close-by the impressive presidential palace is a treasure and a landmark of Ha Noi. It appears somewhat bizarre, but is a small and fine gem: „the Một Cột Pagoda” (One-Pillar Pagoda). The name is immediately evident, its second name is Pagoda of the goddess Quan Âm. Quan Âm is the goddess of the mercy. According to the legend the goddess Quan Âm appear to King Lý Thái Tông (1000 - 1054) in a dream.

The king was already old and still childless and sought a successor. In the dream Quan Âm handed him a son while seated on a lotus flower. The king then took a farmer girl as concubine and had a son by her, who is the long desired successor to the throne forecasted by the goddess. Deeply gratefully Lý Thái Tông built in the year 1049 the Một Cột Pagoda in honors of the goddess of mercy. As the name suggests the pagoda stands on one pillar in the middle of an artificial square lake. In the season, the lake is covered by lotus flowers. The pagoda itself is wooden and about 3 x 3 meters. Inside resides a statue of Quan Âm. In the course of its 1000 year history this pagoda was destroyed – and rebuilt - many times.

The French occupation army last destroyed it shortly before quitting Viet Nam. In 1955 it was – again – reconstructed, this time – unfortunately! - with a concrete pillar instead of the original wooden pillar. Unfortunately? It could be seen as the pragmatic Vietnamese attempt to connect the tradition with the modernity. Whether concrete or wood, the Bodhisattva Quan Âm will continue to be admired here as child-bringing goddess. This delicate pagoda is worth a visit anyway.