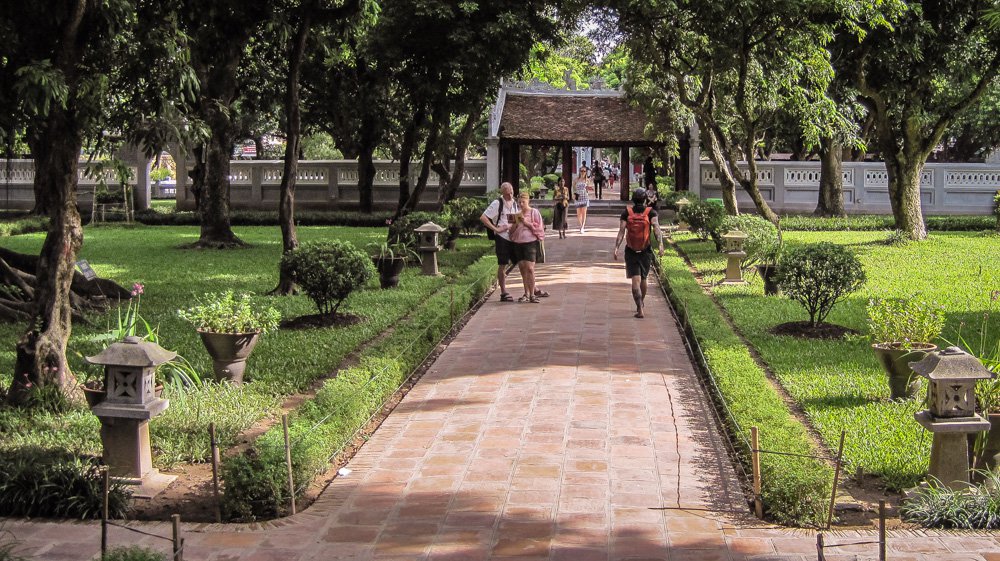 The Temple of Literature is one of the most popular landmarks of Ha Noi (Pho Quốc Tử Giám, Tel 845 2917, admission 5000 Dong). The term “temple” may mislead a lot of people into believing the complex is a religious site. Văn Miếu, in fact, is a Confucian memorial place dedicated to the centuries of education and literature in Vietnam. Founded in 1070 by King Ly Thánh Tông, the temple was built to pay tribute to the Chinese philosopher Khong Tu (Confucius), his scholars and people with high academic achievement. In 1076, the Quốc Tử Giám (or Imperial Academy) was founded. As Vietnam’s first university, it was initially opened to educate the aristocrats, nobles and royal family members. In the later years, the school was opened to talented commoners. In old Vietnam society, Si (literary bureaucrats and scholars) were given the highest regard. Below them in the social ranking are the Nong (farmers), Cong (craftsmen and workers) and Thuong (merchants). Functioned within 1076 to 1779, Văn Miếu was the only place where mandarin class was taught. Through its history, over two thousand doctors have graduated from the university. Known as "pagode des Corbeaux" during the French colonization, the whole of Văn Miếu encompasses a profound traditional meaning of both a Confucian temple and the first imperial university of Vietnam.

The long narrow complex consists of five courtyards lined out in order and divided by walls. The first area is the entrance where the main gate (Văn Miếu Môn) with two stone dragons stands. On it, the inscription “Ha Ma” reminds visitors of former times, regardless of their social ranking, to dismount their horses before entering Văn Miếu. As the entrance leads to three pathways running the length of the complex, the center path heads straight through another gate to the second courtyard indicated by two small gates on both sides. Here, its main course leads to Khuê Văn Các (Pavilion of Literature) and two other small gates on its side. These first two courtyards are basically quiet and serene exuding a peaceful haven with its well-trimmed lawns and grown trees providing suitable shade to the garden’s entirety.

The third courtyard separates the Khue Van area from the Gate of Great Synthesis (Đại Thành Môn). A square lake, the Well of Heaven’s Clarity (Thien Quang Tinh), sits at the center of the courtyard and is surrounded by walls. On both sides of the lake are pavilions with stelae, each sits upon stone tortoises and holding inscriptions of names, birth places and achievements of doctorate recipients from periods 1442 to 1780, where the Vietnam capital was moved to Hue. There are 82 stelae presently standing in Văn Miếu, where some 34 others are believed to have been lost over the years.

The entrance of the fourth courtyard from the latter directly faces a pavilion, named the Great House of Ceremonies, where a large red lacquered statue of Confucius stands. Bordered on either sides are two great pavilions which used to host alters of 72 of Confucius’ greatest students. Now, the buildings house several gift shops, souvenir item displays and a museum. In the fifth courtyard (Thai Hoc) stands the Quốc Tử Giám, Vietnam’s first university founded in 1076 King Ly Can Duc, but this was destroyed by French bombing in 1947.

Having gone through several destructions and restorations, the Temple of Literature still retains its original features. Signifying a hallmark of education in ancient Vietnam and its great value to the Vietnamese people, the longevity of the temple and its structure is astounding. A place worth-exploring, Văn Miếu is not just among the finest historical and cultural sites in Hanoi, but in the whole Vietnam as well.