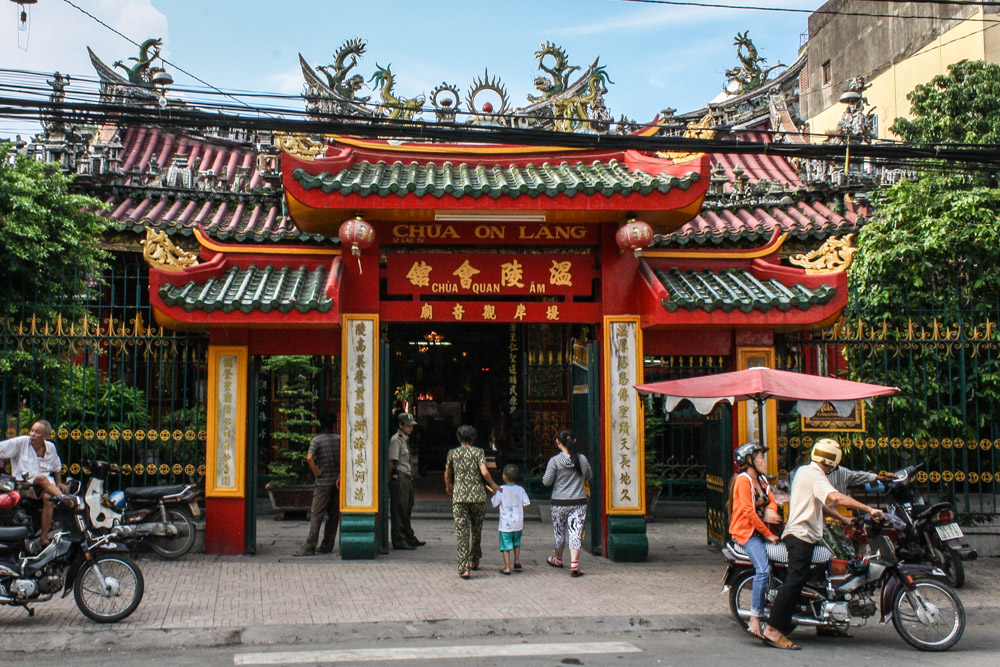 In Vietnam, pagodas offer a final resting place as well as an opportunity to commune with the departed. Moreover, they also serve as a preparation for the after life as some people book shelves in the place early so that everything is in order when it’s their time to leave the physical world.

Khanh Van Nam Pagoda is one such pagoda often frequented by worshippers. Located in District 11 of Ho Chi Minh City, it was built between 1939 and 1942 by the Cantonese Congregation. This is said to be the only pure Taoist pagoda in Vietnam wherein over 2,000 Taoists live and worship in. Chu Tu, or Uncle Four, is the guardian of the ashes room in the Khanh Van Nam Pagoda. Of Chinese-Vietnamese origin, he has been working in the pagoda’s ashes room since the 1990s. According to him, relatives of the dead come to clean the jars and pray for their loved ones’ souls all year round, especially before, during, and after the Vu Lan Festival, or the festival of all souls, which is held on the 15th day of the seventh lunar month.

In fact, just days ago, the room was filled with people to visit and worship their dead in celebration of the festival. The ashes room of Khanh Van Nam Pagoda was constructed in 1977 after a cemetery just near the place was destroyed due to site clearance purposes. The pagoda was made to store the ashes of mainly Chinese-Vietnamese devouts. Thien Hung Pagoda is another haven to dead people’s ashes.

It opened in the 20th century on Van Kiep Street and like Khanh Van Nam Pagoda, local residents place the ashes of their loved ones there to secure and honor their souls. Relatives visit the ashes during the Vu Lan Festival and other important anniversaries and even on ordinary days, finding the pagodas a solace for a moment’s silence and even a place to ask for repentance of their sins. But according to Thien An, senior monk of Thien Hung Pagoda, the old belief that during the Vu Lan Festival, the souls of the dead return to their homes and share in the food their relatives have prepared for them, is no longer a religious practice or superstition but more of a tradition to preserve the memory of ancestors.

Chu Tu, the guardian of Khanh Van Nam Pagoda and whose ancestors came from the Guangdong Province of China, gratefully said that some visitors, aside from cleaning the jars of their departed, even help him wipe the other jars from dust, especially those abandoned by their families. This is a big relief and comfort for him since he couldn’t seem to do the task alone anymore with the growing number of jars in the pagoda. He said he feels sad for the jars that seem to have been forgotten by their loved ones. He noted that the youth especially seem to have no respect or even gratitude for their elders. Keeping a dead person’s ashes inside the Khanh Van Nam Pagoda costs about VND1 million (US$50). Lately, not only the deceased get to have a place in pagodas, but also the living ones who reserve a shelf in the ashes room in preparation for the after life.

The jars, especially those of the abandoned ones, can stay in the pagoda for 20 years, after which the family of the dead will be asked to collect the jars of their departed and throw the ashes into the sea or river, a ritual called the water burial. But Thien An believes that filial piety should be practiced not only after a person dies, but even when he/ she is still alive. As a monk, he believes that not only Buddhists or Taoists, but every single person must practice filial piety not only during the Vu Lan Festival or on special occasions, but carry it as the most important virtue of his/ her daily life. Our life on earth is only transient and so we should spend every moment of it in loving and happy memory with our parents and family as a whole.