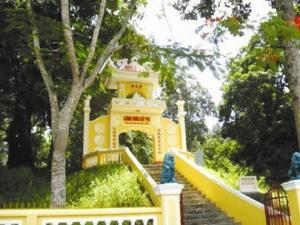 Oc Eo culture is a common name of the civilization of the legendary Kingdom of Funan in the southern region. After some 1,500 years of natural and historical vicissitudes, the culture has fallen into oblivion.

From Oc Eo Market following an asphalted road southeastern of Ba The Mountain, tourists will see the entrance of the pagoda on the mountain slope, with two porcelain lion statues welcoming guests. Climbing the multistairs, tourists will enter the main three-door gate of the pagoda. On either side of the gate are four parallel sentences and four lines of Chinese characters promoting the dharma.

Entering the yard, tourists seem to be lost in a peaceful space with tall shade trees and breezes, and the rustling of dry leaves on the ground.

According to legends and the master monk of the pagoda Thich Thien Tri, in 1913, when the French authority built roads and Ba The police station at the foot of the mountain, locals found an intact black-stone statue, which has four hands and is 1.7m tall, buried two meters underground. Local Khmer people had strong young men carry the statue up the mountain to worship, as they believed that it was the statue of Neata Phrom, the God of Mountain. But they could not do so because the statue was too heavy. They then asked local elders to set up an altar and pray, and the statue was easily carried to where it is now.

Two schist steles, each being 1.8m tall, 80cm wide and 20cm thick, were also found. The steles were curved with ancient characters that no one could read. Locals then built Linh Son Pagoda to worship the four-handed Buddha.

According to researchers, this four-handed Buddha is in fact the statue of Vishnu with the seven-headed God Snake of Nga. The ancient scripts carved on the steles have not yet been deciphered, but they are considered to have the same origin with Brahmi scripts used by Indian people between the second and the sixth centuries A.D.

At the back of the pagoda, near Nam Linh Son archaeological site, is a four-branch Dipterocarpus alatus which is almost 50 meters tall. Locals call it cây Bn Ngón (four-fingered tree), considering them the fingers of Buddha.