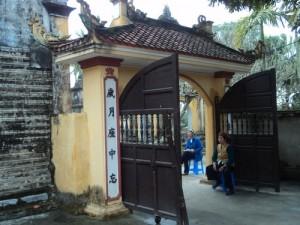 In the Red River Delta, it is an unwritten requirement for every commune to have at least one pagoda. So it is not surprising that you find these pagodas by the thousands in such places. But in Tra Phuong Village, in the Thuy Huong Commune in Hai Phong City’s Kien Thuy District, one pagoda stands out above all the rest – the Tra Phuong Pagoda.

Dating 1,000 years old, Tra Phuong Pagoda has been around for a very long time and has many stories to tell. Thich Quang Man, head of the pagoda, narrates the long history of the pagoda as well as its features as an architectural structure.

According to Man, Tra Phuong Pagoda was built in the early 11th century (1010-1020). Its first name was the Ba Danh Pagoda and was located in an isolated high area surrounded by many trees. As if echoing a verse by the late poet Yen Do: “In the past, pagodas were among trees and rocks, monks were among the clouds.”

It was so quiet indeed in Ba Danh Pagoda that it inspired a saying still quite popular up to this day: Vang nhur Chua Ba Danh. It means “As quiet as Ba Danh Pagoda.” In fact, the saying was so famous that it was also used to describe places and business establishments with very little clients.

Sad to say, Ba Danh Pagoda now is just a shadow of what it used to be. There is almost nothing left of the once mighty pagoda except three huge rock columns designed with elaborate religious architecture decorations famous during the Ly Dynasty (1009-1225). These intricate religious designs are 10 centuries old, historically significant, yet exposed to the natural elements and possibly left ignored and destroyed forever. The only upside perhaps is that the place is considered a holy ground and no one will dare to touch or steal anything.

When Mac Dang Dung became king in 1527, he paid tribute to the Ba Danh Pagoda for sheltering him during the “deadly events” in his young life. He renovated the pagoda and changed its name to Thien Phuc, meaning “good luck from God.” But some stories identify Queen mother Vu Thi Ngoc Toan for making the improvements to the pagoda. An inscription on a rock stele dates 1562 as the time of renovation.

When the Mac Dynasty ended its reign in 1592, soldiers of the next ruling dynasty Le-Trinh destroyed many architectural structures reminiscent of the previous leaders. Sadly, Thien Phuc Pagoda was among those ruined. But in the 20th century, Ngo Thi Dinh, who lived in the village, renovated it to look like it is today. In 2007, Tra Phuong Pagoda was named by the Ministry of Culture and Information as a national architecture and cultural relic.

Today, Tra Phuong Pagoda looks like a letter T with five frontal and three rear sections. All the columns, beams, joists, wooden altars and other decorate items are intricately designed. Dozens of Buddhist monk statues adorn the middle of the main hall. The statues of King Mac Dang Dung and Queen Vu Thi Ngoc Toan can be seen in the right and left sides of the pagoda. There is a house of steles and tombs of the monks to the left of the entrance which tell the story about the construction, repair and restoration of the pagoda from the Ly, Mac and later dynasties. Two rock crocodiles can be found in front of the house of steles, under hundred year-old trees.

According to legends, the statue Queen Vu Thi Ngoc Toan is very holy that good people can make a wish on it and it will come true.