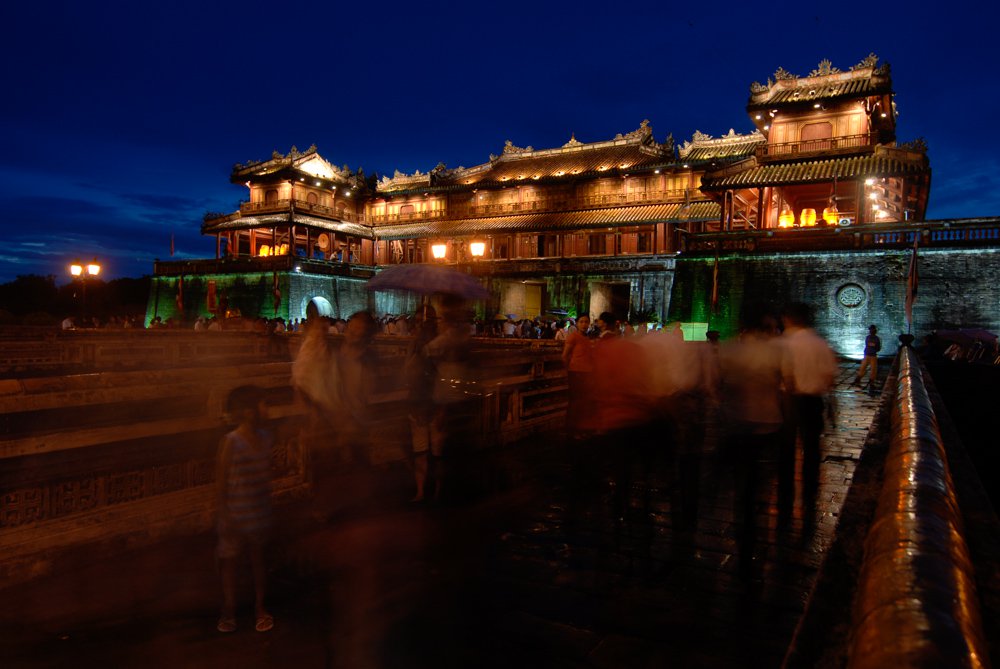 There are sources claiming that the name of the city Huế comes from “Hoà” (harmony). This could be the reason for the Nguyễn dynasty to choose Huế to be their emperor city. Lying on the bench of the Perfume River (Hương Giang) and embedded between the mountains Huế still has the grandeur and the rest of the former glory, combined with a hard-to-describe atmosphere constituting somehow an emperor city. Over 100 years, from 1802 to 1945, Huế was the capital of Viet Nam and the domicile of the emperor, only thinkable together with its Citadel and the Forbidden City. A visit of Huế and the citadel is quite a must for a trip to central Viet Nam. Today the Citadel is chosen as a UNESCO world cultural heritage.

The citadel complex is built in the style of the Forbidden City in Beijing. The citadel has two walls: the Outer Wall (Ngoại Thành) and the Inner Wall (Nội Thành). The Citadel complex is surrounded by the impressive Outer Wall, which is built from 1805 to 1832, 11 km length, 6 m height, with 11 gates, 24 towers, as protection against all kinds of intruders and enemies. Inside the Outer Wall there was a city-inside-the-city, where the inner circle of the emperor and their families resided. The Outer Wall is encircled by a moat (23 m broad and 4 m deep) which is now mostly covered by water lotus. The whole expenditure however did not offer enough protection against fires (1945) and bombs during the several wars. A lot of damages are still visible.

The Forbidden City with the Emperor Palace lies inside the Outer Wall, is surrounded by the Inner Wall (Nội Thành), again with its own moat. The area inside the Inner Wall was formerly reserved for the imperial family and the royal household. As usual in Asia that time, the architecture layout of the Citadel is planned strictly following „phong thủy“ (chin. Fengshui) and astrology rules, according to which rectangular forms correspond to the earth and circles correspond to heaven. The complex is thus built with rectangular patterns. One could feel the holistic thoughts of the planers by walking through the Citadel and trolling inside its palaces and surrounding buildings.

On entering the Citadel through the “Midday Gate” (Ngọ Môn, entrance fee 55.000 Dong), you will find a lotus pond just next to the entrance. The bridge over the pond was once reserved for the emperor. Going over the bridge you will first reach the most important building, the “Hall of Highest Harmony” (Điện Thái Hoà), which was an important venue for official receptions and other important royal ceremonies. The pompous columns of the hall are lacquered with gold inlay. Around this hall are former mandarin preparation buildings, the apartment palace Kiến Trung with small lakes, well-appointed tree formations.

The whole area is still under renovation, after major destructions in 1947 and 1968, and reconstruction 1949. The area is now a quite well-developed touristic complex. It is improving from year to year and approaches their earlier splendor and beauty.

Vietnam.com’s tip (Citadel Hue) Take a walk from Truong Tien bridge along the Huong Giang river (Tran Hung Dao Street) toward the Flag Tower (Kỳ Đài). Turn right on the Dinh Tien Hoang Street to enter the Outer Wall at Thuong Tu Gate: Turning left, you will see the Flag Tower again on the left and the Inner Wall on the right with its Ngo Mon Gate. Enter the Forbidden City at Ngo Mon Gate (entrance fee 55.000 Dong), climb up the Ngo Mon Gate just after the entrance: the view is marvellous. Here you will see the two huge Emperor’s drums. After going down, cross the bridge to the Dien Thai Hoa, go crossing Dien Thai Hoa to the inner yard, here take detours to see unrenovated sites and buildings. Reserve 2-3 hours for the visit. After the visit of the Forbidden City, if you have time, exit the Forbidden City at the Hien Nhon gate, continue to Dinh Cong Trang Street, turn left to Dinh Tien Hoang, go to the Ho Tinh Tam (the Emperor’s lotus lake), detour Dinh Tien Hoang Street, turn left on the Mai Thuc Loan Street to exit the Citadel through the Dong Ba Gate.