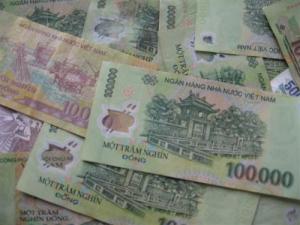 25.11.2009 : The central bank in ${bigcity_Hanoi:"Hanoi"} fixed the dollar on Wednesday at the rate of 17.961 VN Dong, corresponding to a depreciation of 5.4 percent. Since June 2008, this depreciation is the third step in a row. The interest rates are rising from 7% to 8%, in a move to combat inflation, rein in lending and bolster its currency. The timing of the move surprised analysts, who had not expected Vietnam to start nudging up rates until early 2010, according to the New York Times.

Vietnam is now one of only a handful of countries to raise the cost of borrowing as the global economy stabilizes. The step can further help to support touristic industries as it make travels in Vietnam cheaper for foreign tourists. Economists also criticized that the country's currency was artificially high and would fall sharply, with a waiver of the state foreign exchange controls. The Central Bank of Vietnam buys regularly dollars to support the VN Dong. In Hanoi, gold merchants sold the dollar on Wednesday with 19.650 Dong.